You are here: Home1 / ATAS Capabilities2 / Charts3 / Types of frames in the atas platform and their application. Part 2.

Types of frames in the atas platform and their application. Part 2. 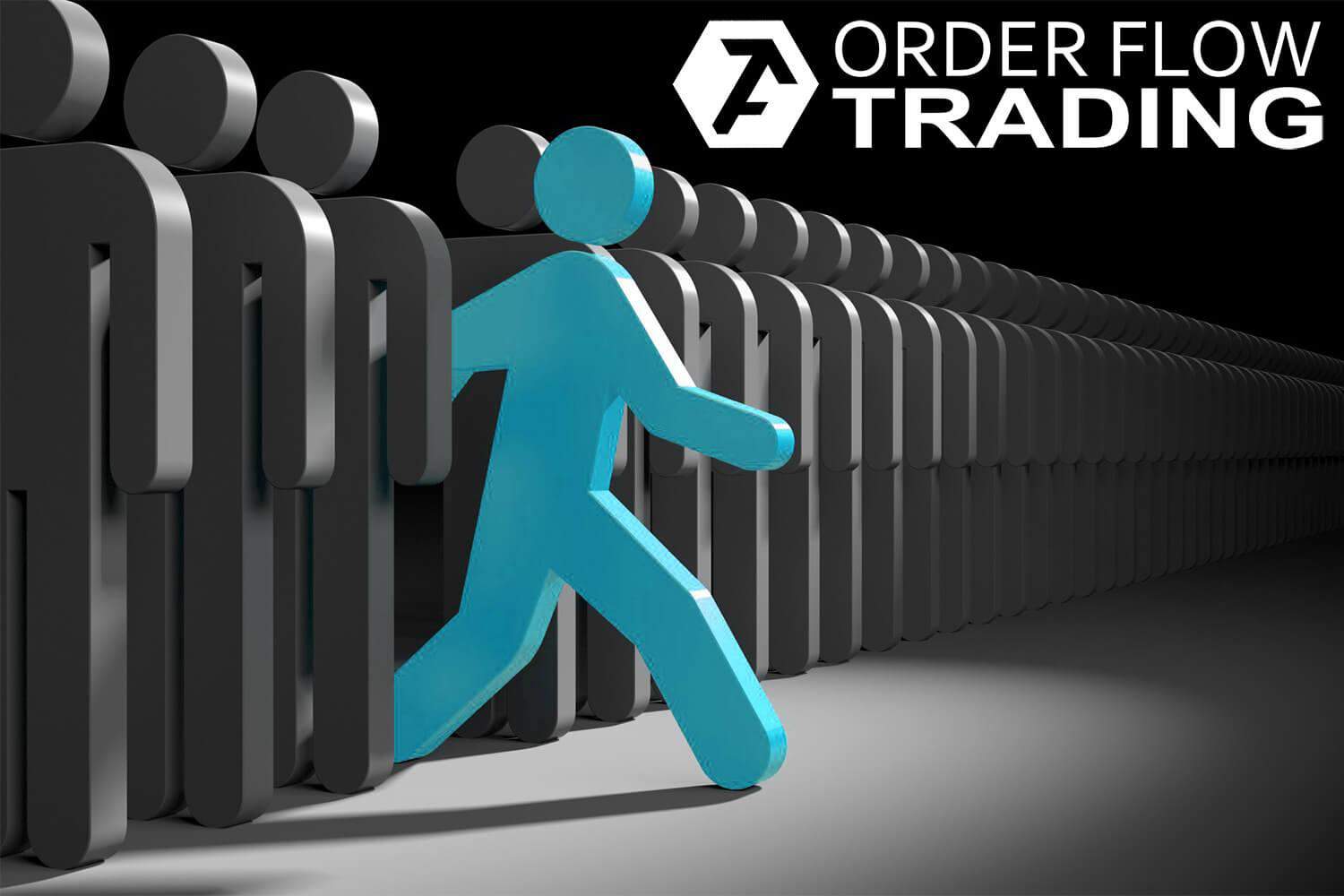 Today we continue the review of the frame types of the ATAS platform, which we started in the first part of the article. Each trader tries to increase efficiency of his trading independent of the trading experience in the currency (Forex), futures or stock market. This assumes a study of new and advanced instruments of the market analysis. In this article we will speak about a number of such advanced instruments, accessible to the users of the trading and analytical ATAS platform.

Volume chart is a frame, based only on a number of traded shares or futures contracts.

For example, let’s set the frame value of 3,000. It means that each new bar is formed after 3,000 contracts have been traded in the market. Unlike with the tick frame, which we described in the first part of the article, here we get a chart with a balanced distribution of volume by bars. Thus, we can get an idea of the current liquidity of the financial instrument, based on the speed of building bars in the chart.

Consequently, more bars would be formed in the volume chart during the periods of high market activity and less during the periods of low activity. This allows to assess the market liquidity easily. Due to the fact that the trading volume of each bar is fixed, a trader who uses the ATAS platform has a possibility to visually assess intensity of the fight between buyers and sellers. For example, big oriented bars tell us about absence of resistance to such movement and vice versa. 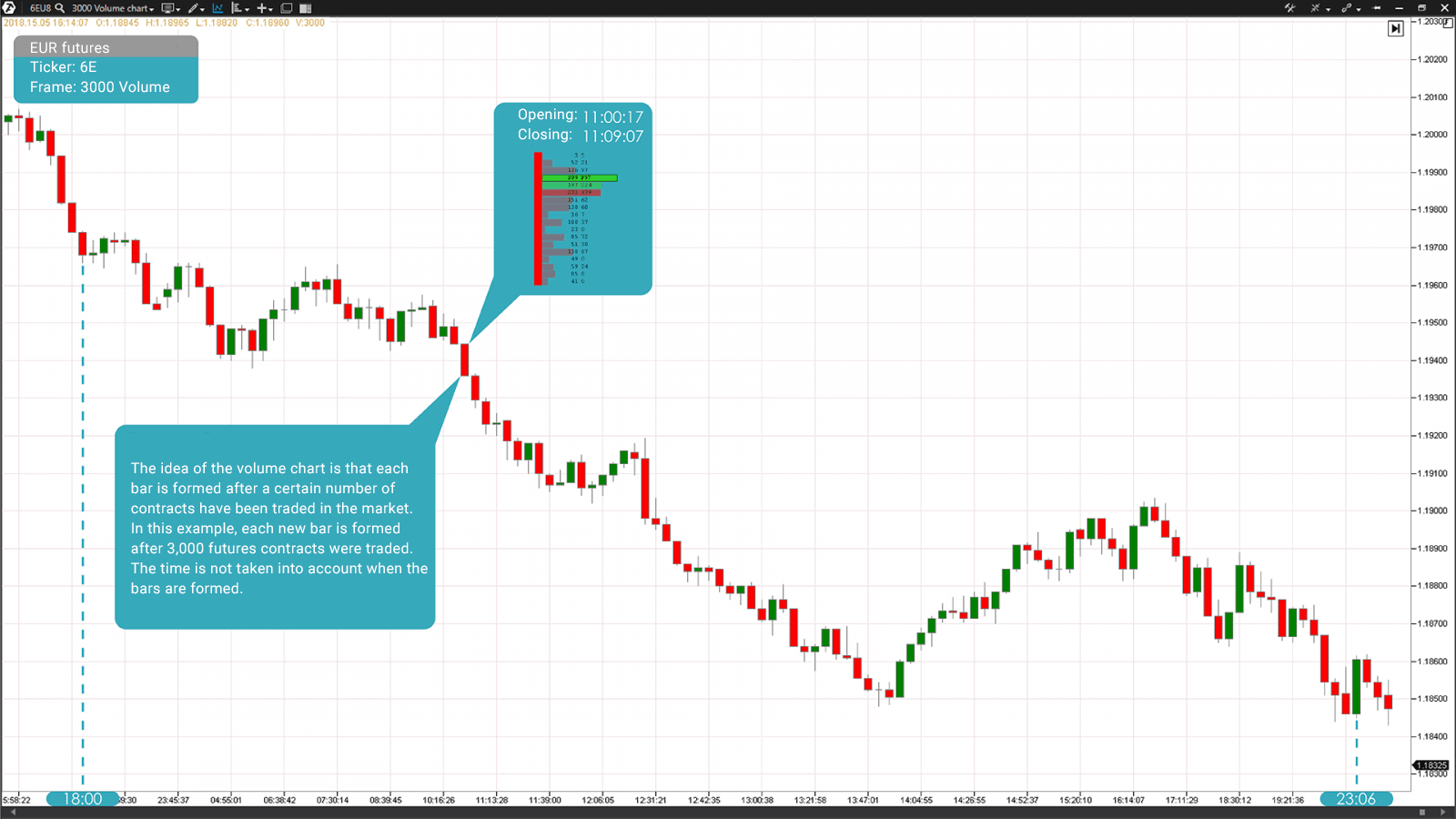 Apart from that, the volume chart allows identifying the trend stability. If the descending trend is characterized by the growth of selling volumes and, consequently, frequent appearance of new falling bars, this could be a sign of the growing presence of bears in the futures market.

It is necessary to remember that it is important to correlate the established values with liquidity of each financial instrument when setting the volume frame, since the volume, which is significant for the market analysis, could be bigger in actively traded instruments than in less liquid instruments.

These types of frames are modifications of the classical range chart, which we described in the first part of the article. They are aimed at the elimination of some shortcomings of the classical range chart. As of today, we cannot disclose the algorithms of their formation by agreement with the developer. If you monitor the process of the bar formation of these frame types, it will not be difficult for you to see their advantages. 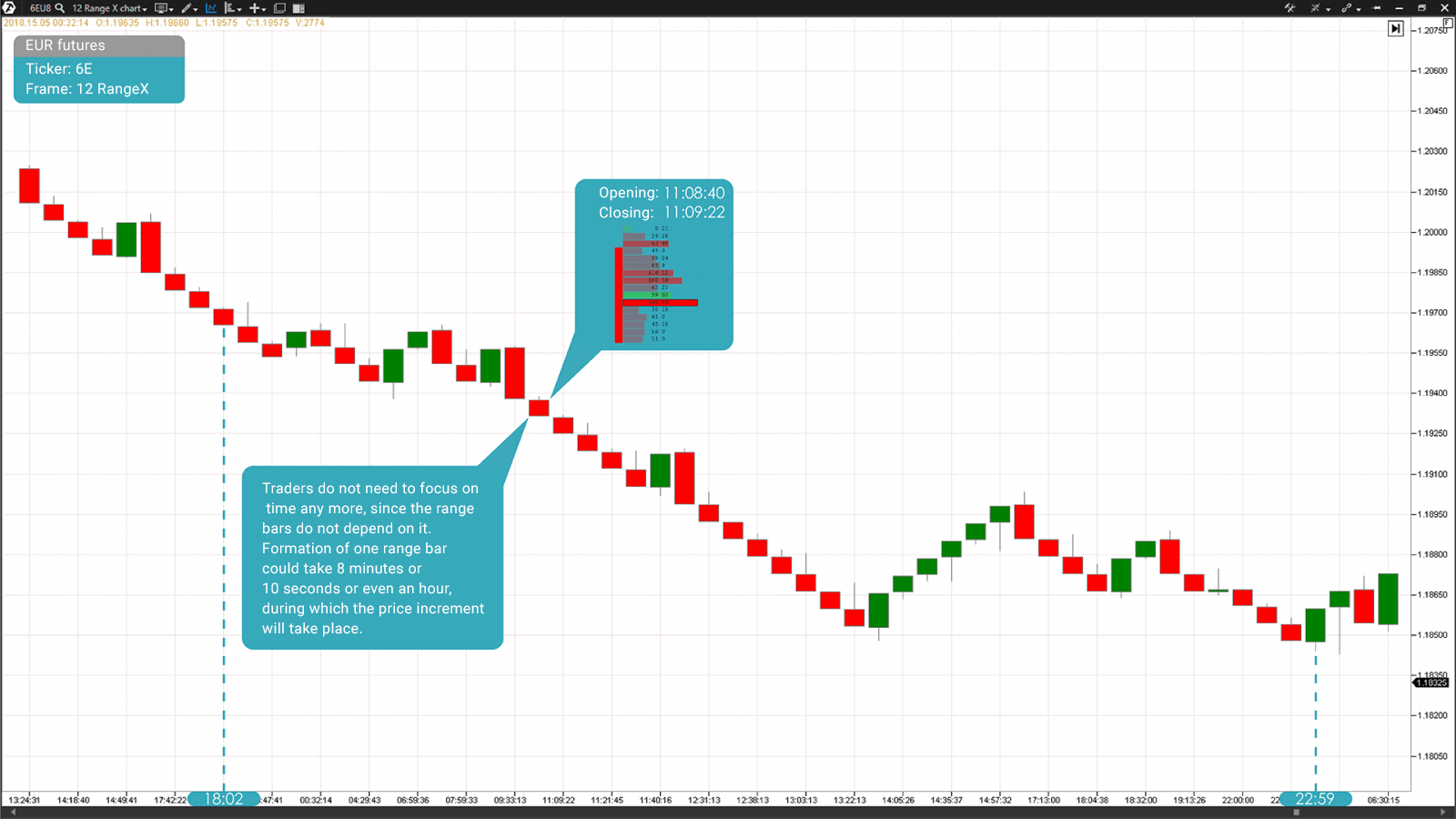 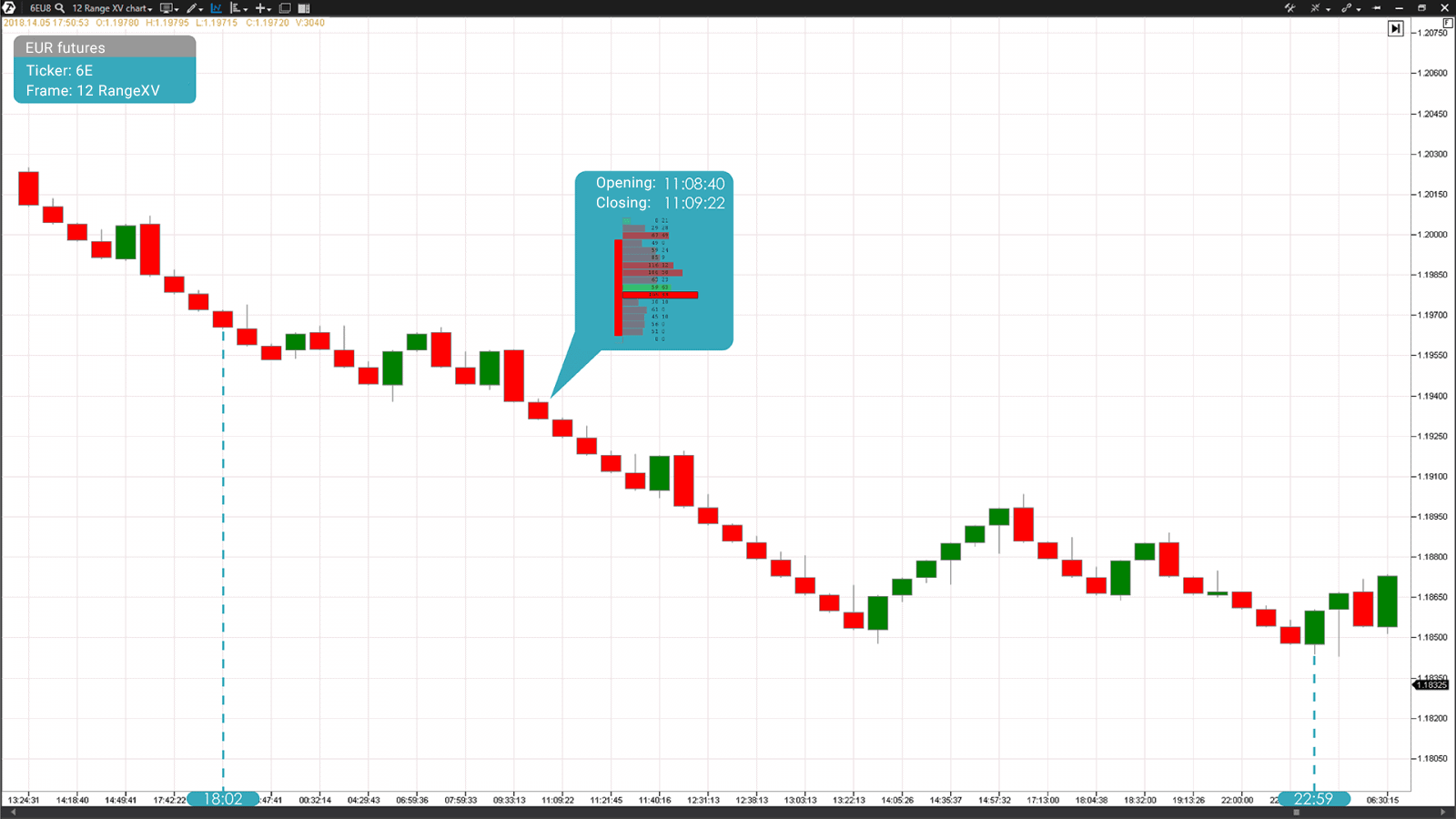 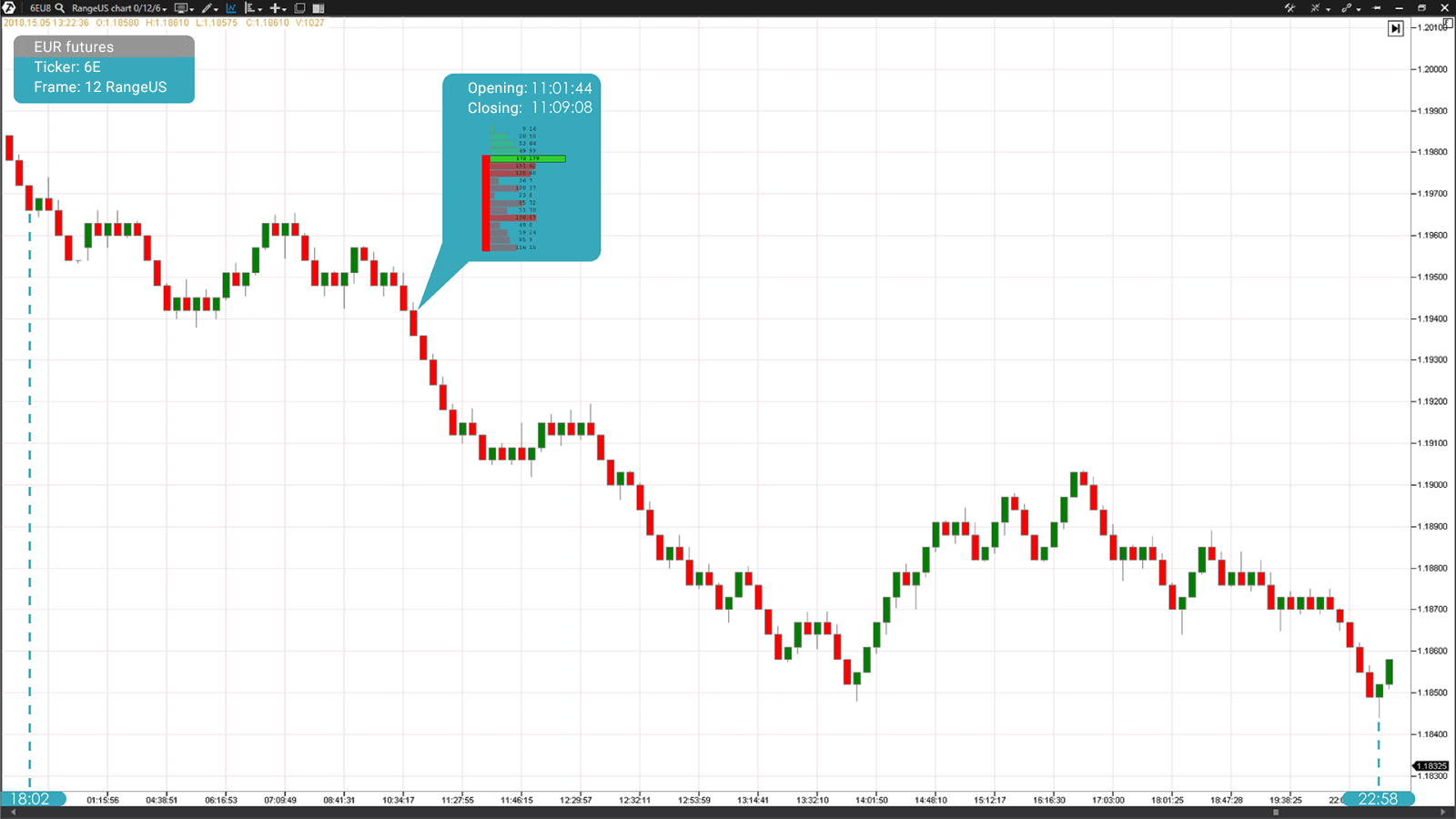 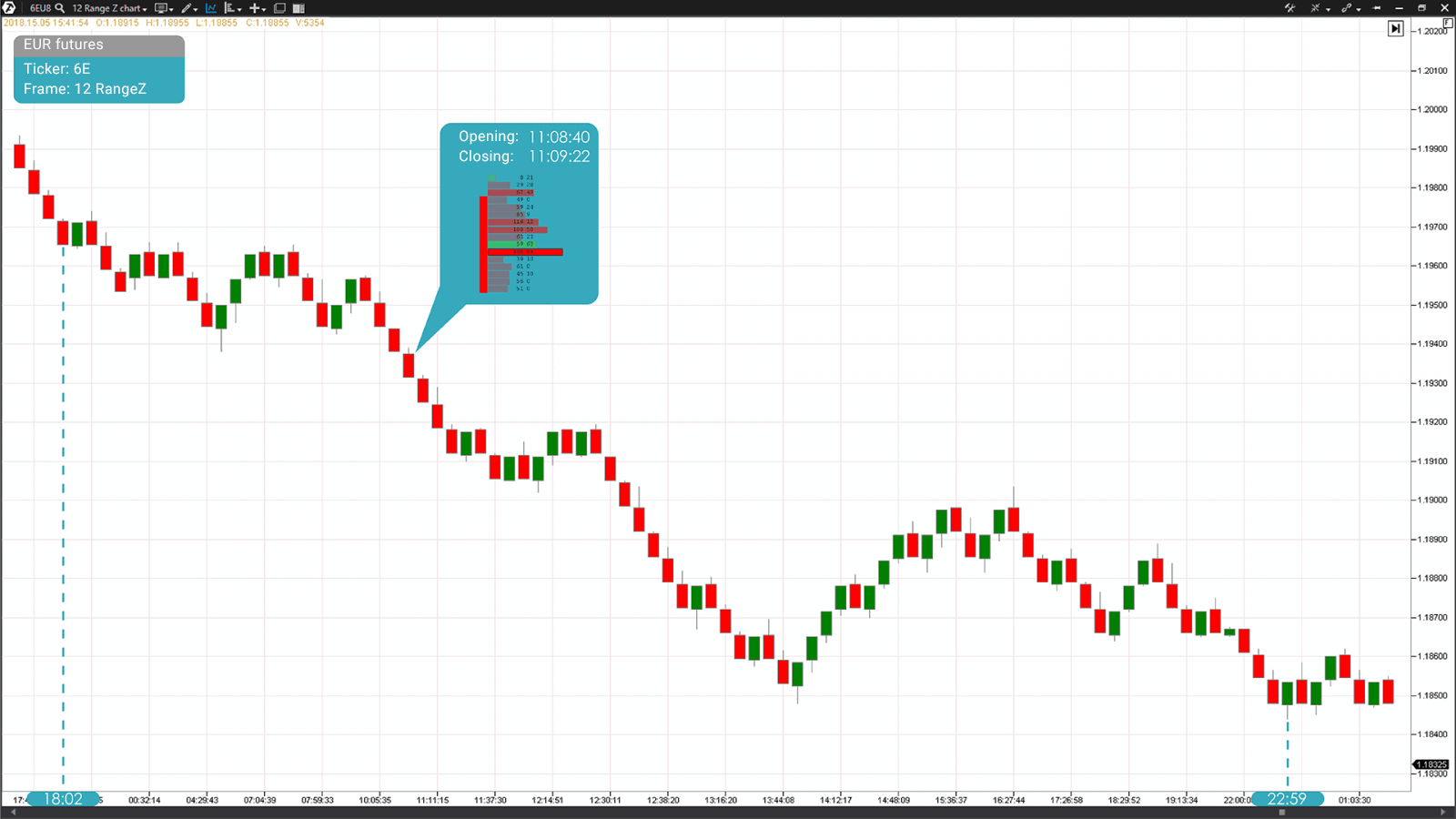 This frame type was developed by Japanese traders. It is believed that the name of  the chart originates from the Japanese symbol ‘renga’ – a brick. One of the main differences of the Renko chart from the regular timeframes is that it does not take time into account when building bars, which are called ‘bricks’. Such a graphical representation of the price movement eliminates the market noise and helps a trader to identify a direction of movement of market price quotes more accurately.

The bar size, which is calculated in cents in the stock market and in ticks in the futures market, is set in the parameters of this chart and not timeframes (M5, M15, M30 and others). Thus, formation of the current bar ends and formation of a new bar starts only when the price passes the set value.

Since Renko is a method of displaying prices, which takes into account their pure movement without taking time into account, formation of one bar may take different periods of time. One ‘brick’ of the Renko chart could be formed during 2 minutes or several hours or even one day. Everything will depend on the market volatility and the set bar size. 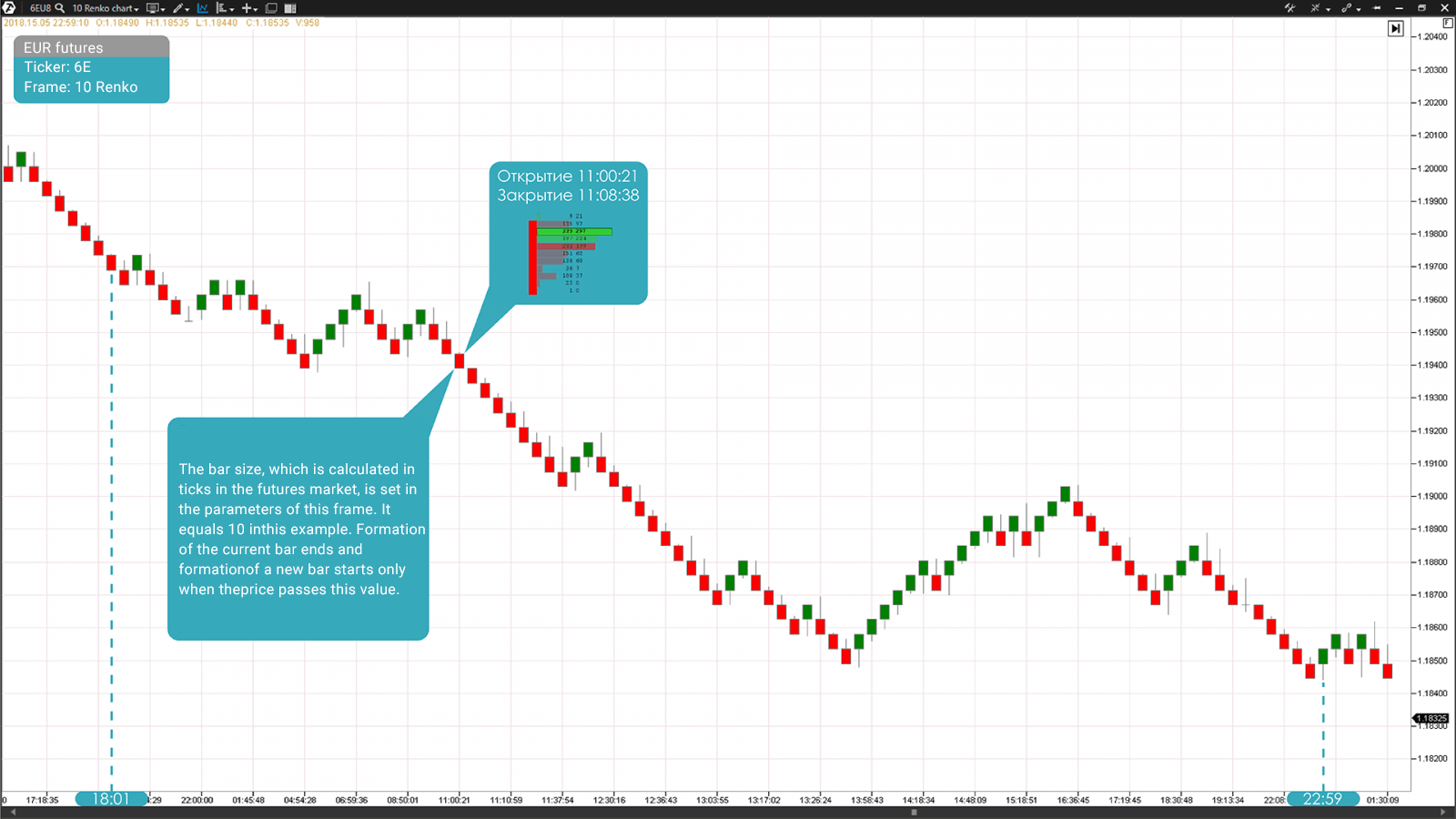 When the price passes a bigger number of ticks than it is necessary for one bar formation, but a smaller one than is required for two bars formation, only one bar is built in the chart. If the price movement doesn’t exceed the minimum value set in settings, a new bar will not be formed in the Renko chart.

Each bar in the upper Renko chart, in accordance with the set value, equals 10, which provides a uniform display of each price movement. Only sizes of these movements differ. The most important difference of the Renko charts from all the timeframes is how ‘calm’ the market movements look in them. A positive psychological effect is achieved in trading due to this. For example, the price movement of the same futures in the 15-minute timeframe for the same period of time looks as follows: 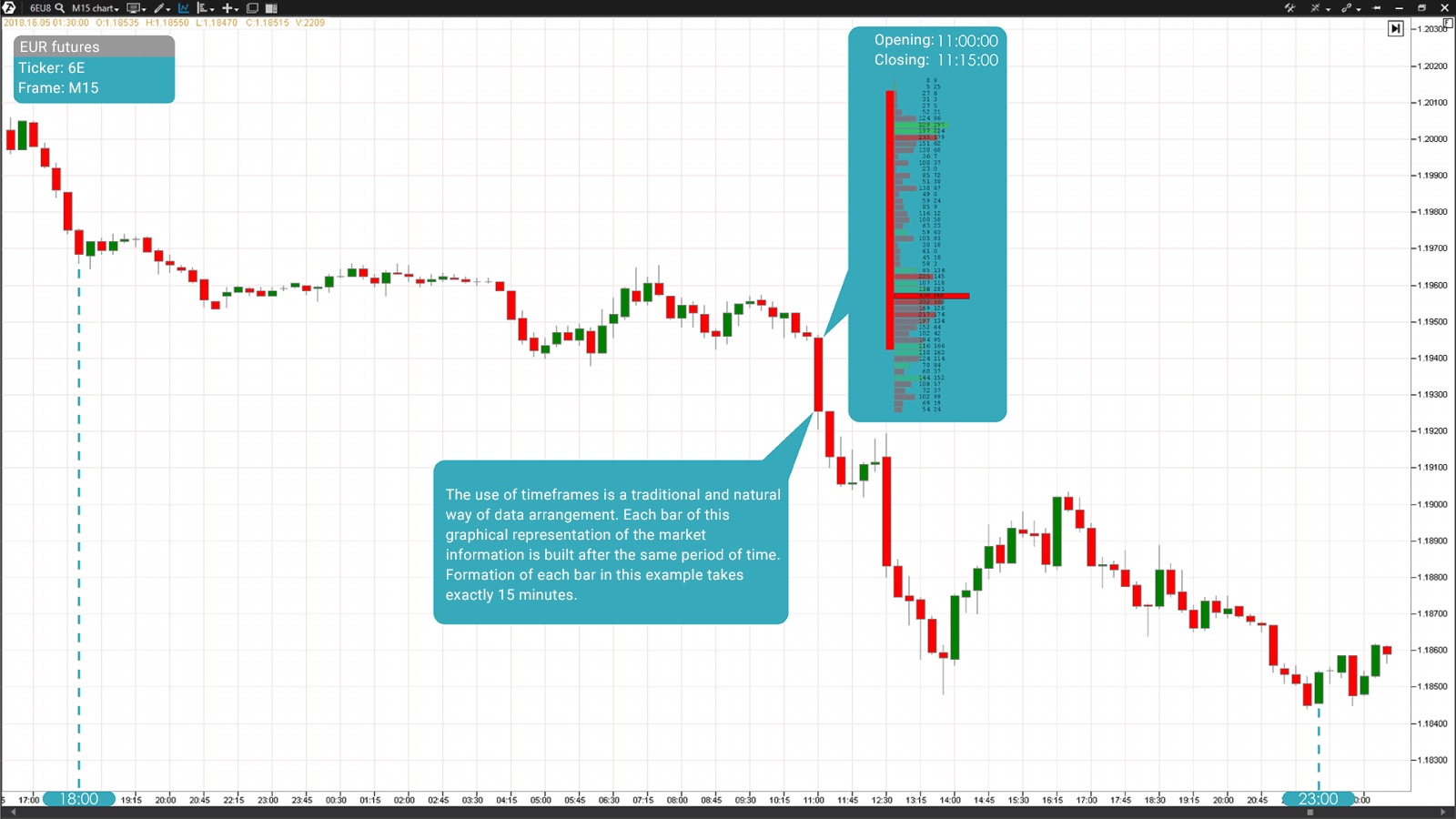 Each new bar in the Renko chart is formed above or below the right corner of the previous bar. It means that the price movement will always have a slope of 45 degrees. A growing bar of the considered frame is green, while a falling bar is red. Note that neighbouring bars never overlap each other: 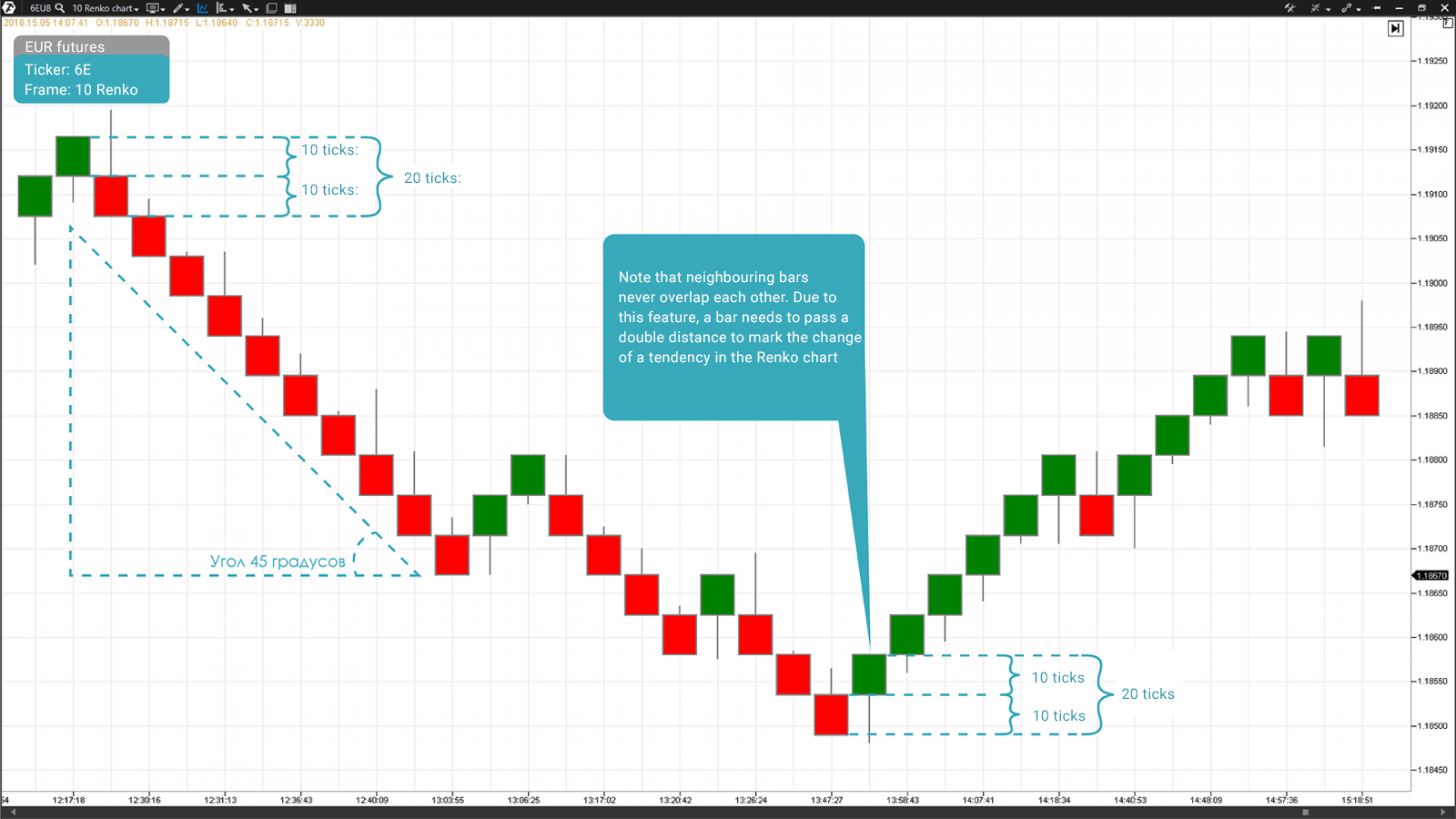 Change of a tendency in the Renko chart of a EUR futures contract (ticker: 6E) with the value of 10.

Due to this feature, a bar needs to pass a double distance to mark the change of a tendency in the Renko chart. That is why it is very important to choose optimal parameters of the considered frame for each financial instrument, in order not to be late with making a trading decision.

The Order Flow chart is an analogue of the spread tape, displayed in the graphical form. This frame shows distribution of volumes in each specific spread. Such a method of the tape display is useful due to the fact that it shows the balance between buyers and sellers more clearly. Consequently, you can see who takes the initiative in real time. As you might have already guessed, the time is not considered as a parameter when bars are built in the chart of this type.

Settings of this frame in the ATAS platform allow setting a filter for display of clusters with the volume, which is above the set value, traded in the spread. For example, if the value of 70 is set in the frame settings, the chart will show only those bars, the traded volume of which was, at least, 70 contracts. 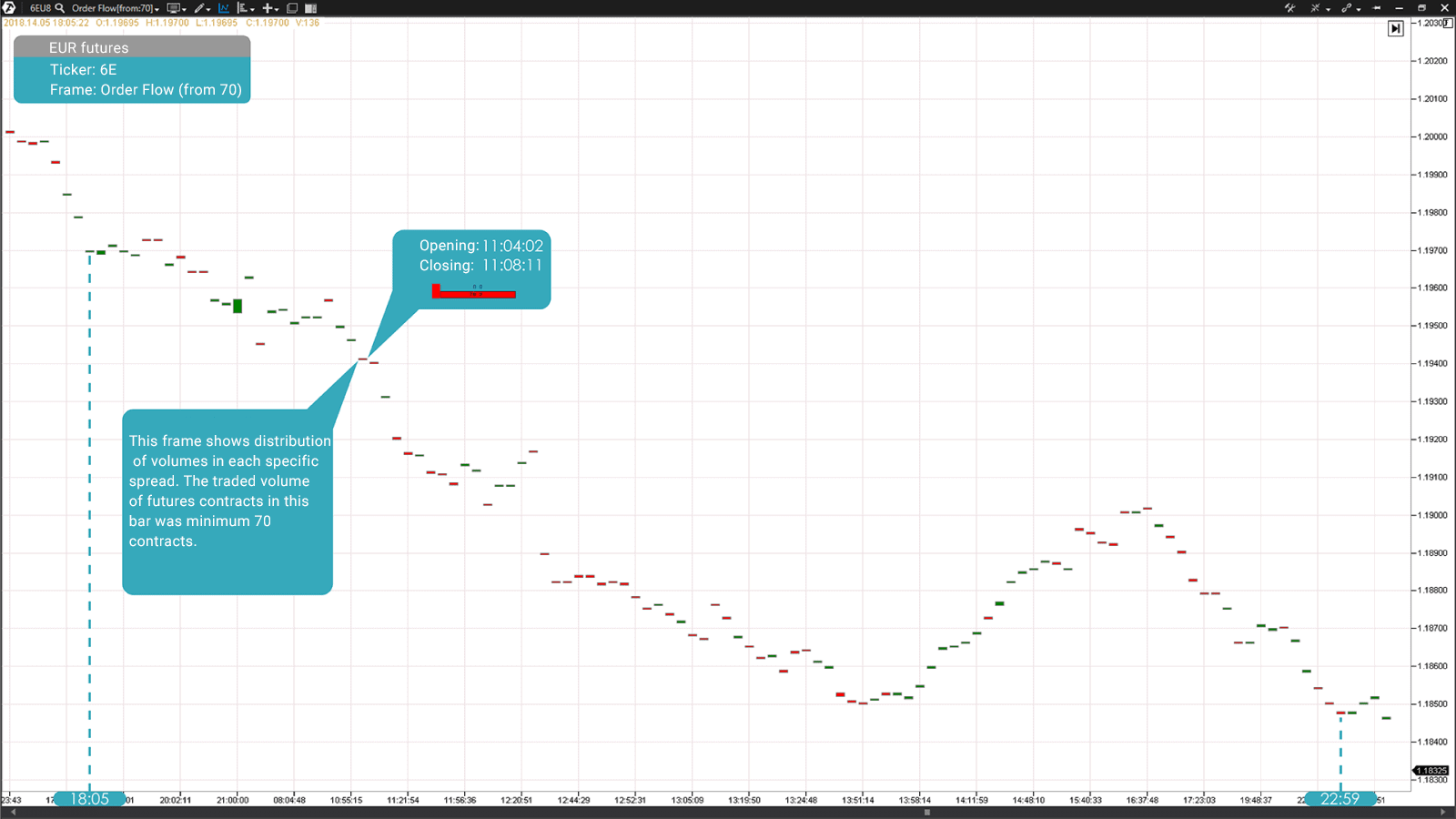 BTK chart is a modification of the range chart. Building BTK bars is based on a mathematical formula, which performs filtration of the market data with the aim to get rid of the market noise. The time factor doesn’t take part in building bars in this frame type.

As of today, we cannot disclose the algorithms of formation of BTK bars by agreement with their developer. If you monitor the process of formation of bars of this frame, it will not be difficult for you to see their advantages. 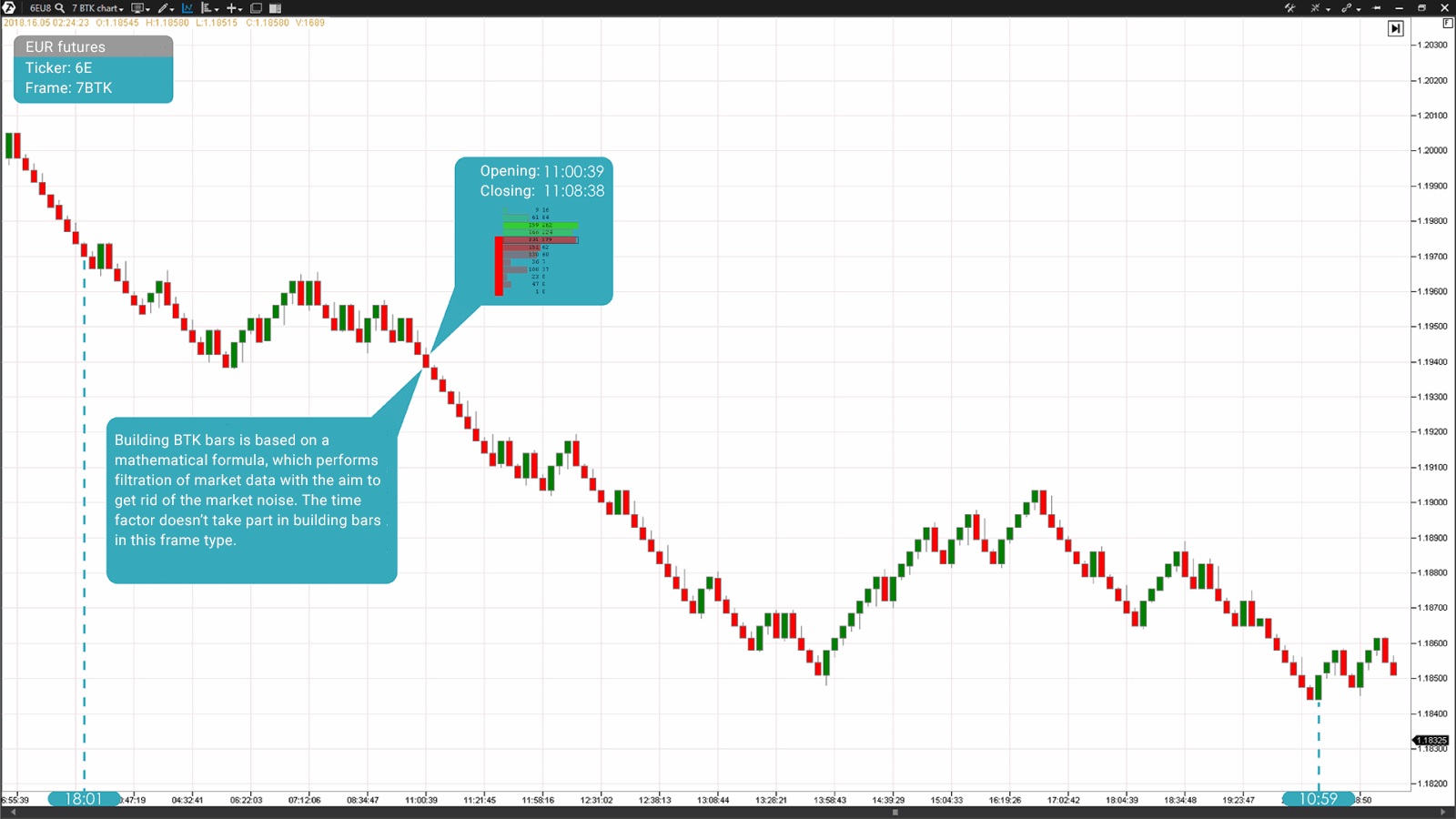 In fact, this frame is the same as the Tick Cluster (the tape). However, the tape is shown as a chart here. Calculations are carried out similarly to the Smart Tape module, but the data are presented in the form of clusters. This innovation approach in displaying the flow of trades allows easy perception of the information that comes to the market. You need to monitor the tape numbers very attentively for identifying order prices, while here everything is displayed in the chart in dynamics.

One frame type cannot be better than another.

Each trader should select that frame type, which fits his trading style best of all. That is why we cannot say that one frame is better than another. All of them reflect the market information, whether it is the price movement or volume of traded futures contracts or stock, in their own way. For example, the Renko chart allows filtering out insignificant price fluctuations, due to which it becomes easier to track market trends. However, this means that some market information, due to this filtration, disappears from the chart, which makes it impossible to analyze some types of candle patterns, which are available in traditional timeframes.

How do ‘good’ orders become ‘bad’ orders?
Scroll to top -->
XThis site uses cookies. By continuing to browse the site, you are agreeing to our use of cookies.Cookie Settings Read MoreReject AllAccept
Manage consent