You are here: Home1 / Technical Analysis2 / Fibonacci and trading. How to trade on the exchange using Fibonacci retracement...

Fibonacci and trading. How to trade on the exchange using Fibonacci retracement levels. 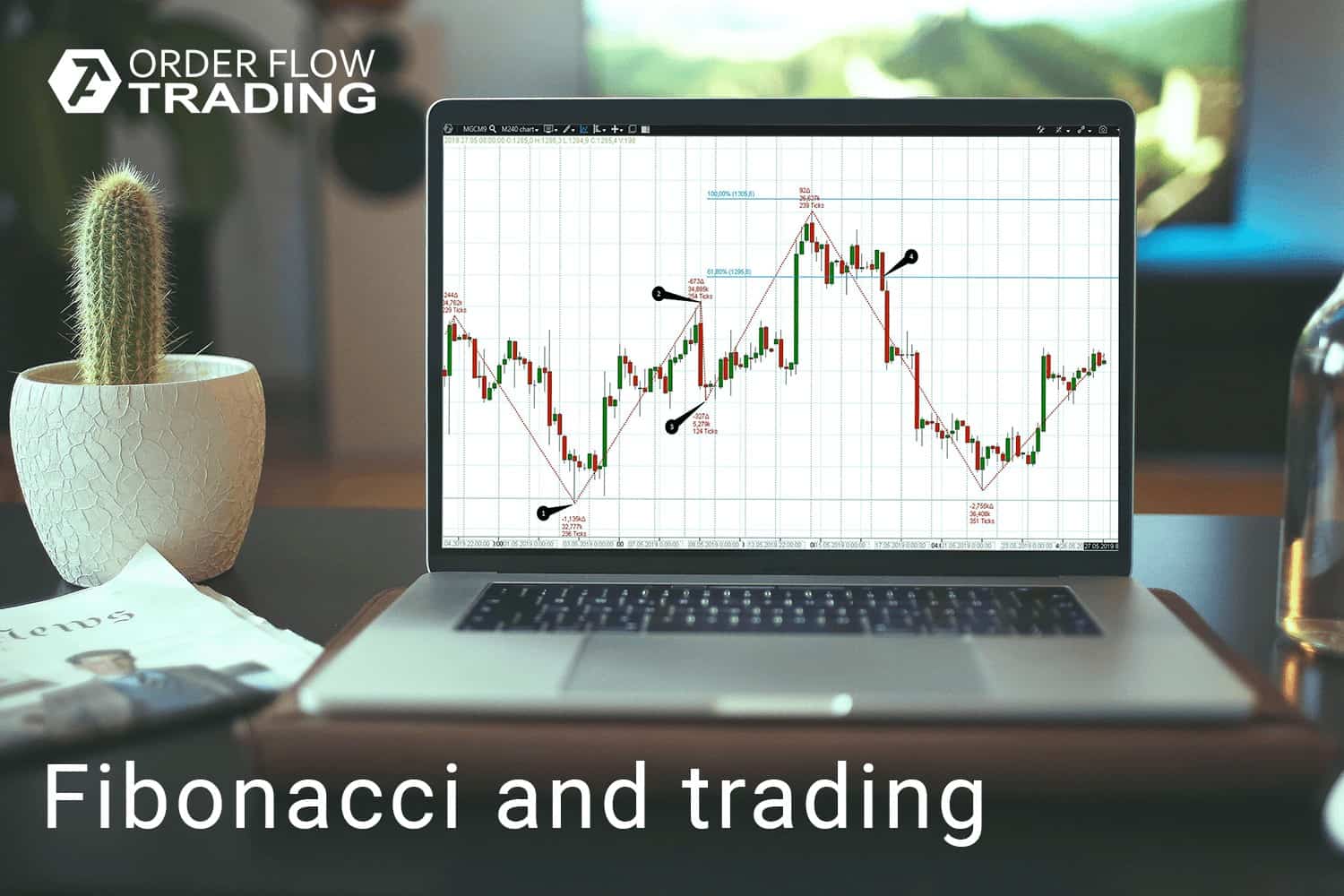 If there are ratings of the most popular instruments for analysis, Fibonacci retracement levels are in all of them. We are sure in it. Great traders speak about them in their interviews. Recently, we even discussed a Forex trading strategy based on Fibonacci numbers and Elliott waves. Today we publish an expanded article about significance of Fibonacci numbers in trading.

We will use the market of gold futures as an example in this article, but you can, as well, apply Fibonacci retracement levels in any other market with any timeframe.

Who Fibonacci is and where Fibonacci numbers came from.

The mathematician Leonardo of Pisa lived in the 13th century and was one of the most famous scientist of his time. The Fibonacci name was derived from two words ‘filius Bonacci’ (son of Bonacci), written on the cover of the most famous work of Fibonacci – ‘Book of Calculation’. Sequence of numbers, which we call now Fibonacci numbers, originates from the problem about rabbits. Leonardo tried to solve the problem about how many rabbit pairs would be inside a fenced area in 12 months from the beginning of reproduction, if there is only one pair in the beginning of the process.Starting from the third month rabbits reproduce recurrently, which means that every subsequent number equals the sum of the previous two numbers: 0,1, 1, 2, 3, 5, 8, 13, 21, 34, 55, 89, 144, 233 and so on to infinity. By the way, if you are still wondering how many rabbits would be in 12 months, the answer is 233 pairs.

We have a pair of questions after this historical excursus:

In fact, the mathematician Fibonacci was not interested in agriculture and didn’t plan to breed rabbits. He systemized knowledge of ancient Greeks and Indians in his ‘Book of Calculation’, introduced Arabic numbers and multiplication and analyzed various mathematical problems, including the one about rabbits. If we divide any number in the sequence by the previous number, we will get the number, which tends to 1.61803398874… This number is called ‘the golden ratio’, ‘Divine Proportion’ or one of the treasures of geometry. It attracted interest before Fibonacci. It is called by the Greek letter ‘phi’ in algebra.

What CFA and EWA are

CFA is the Comprehensive Fibonacci Analysis. It emerged as independent of Wave Analysis for global markets with high volatility. Price corrections are mainly used in the Forex market for trading by CFA. Further on, we will consider CFA instruments: Fibonacci correction, projection and extension levels. The main idea of using CFA instruments is to find a level, from which the price would reverse. The instruments are used both individually and jointly. It is very important in CFA to build any Fibonacci retracement levels correctly, that is correctly identifying beginning and end of a level.

Correction or retracement is a movement against an existing trend. Correction ‘eats’ a part of the trend movement. The following Fibonacci numbers are most often used for the correction levels:

Correction levels are built by candle shadows, that is by their high and low points. You need to find a trend, first, in order to build a correction level. All traders build trend lines differently – there is more creative activity in it than a systematic approach. If you have doubts, the ZigZag pro indicator will help you to identify the upper and lower points of a trend line. Since Fibonacci retracement levels could be unsymmetrical, pay attention to where the wave, by which you build levels, starts and ends. In case the trend is descending, there is 0% in the bottom and 100% on top. And it is vice versa if the trend is ascending. If someone gets confused with sides or used to build correction levels always in one direction, the trading and analytical ATAS platform can arrange mirror reflection of levels in one click. 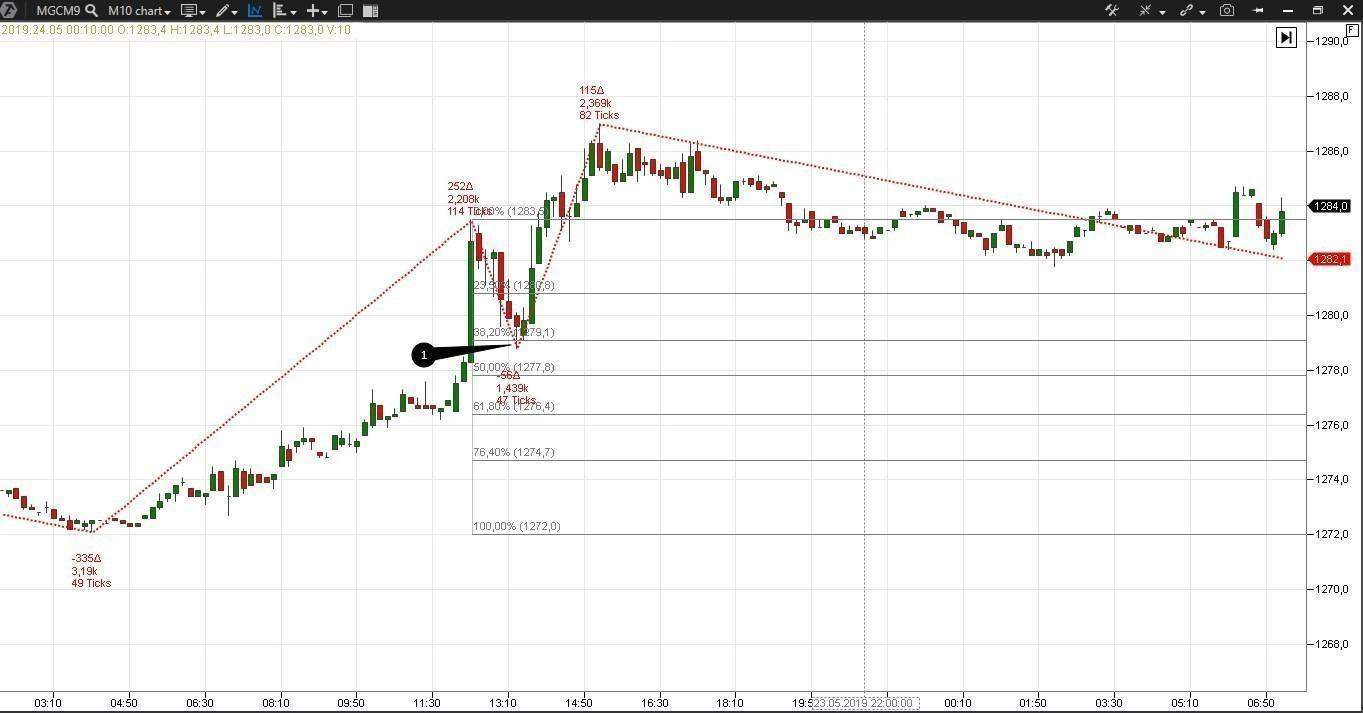 We used ZigZag pro with the 40 ticks setting for identifying the trend. If you do not know what indicator settings should be used, watch this video on our channel. The trend correction in our chart ends in point 1 after deviation from the high by 38.2%.

The correction pattern is a movement between insignificant correction levels, after which the price, most often, moves to the key level of 61.8. There are 4 patterns depending on namely what correction levels are touched by the price. We will not discuss all patterns in detail. We will show one example, which is called IP2 or price movement between the 38.2 and 14.6 levels. Theoretically this pattern looks as follows: 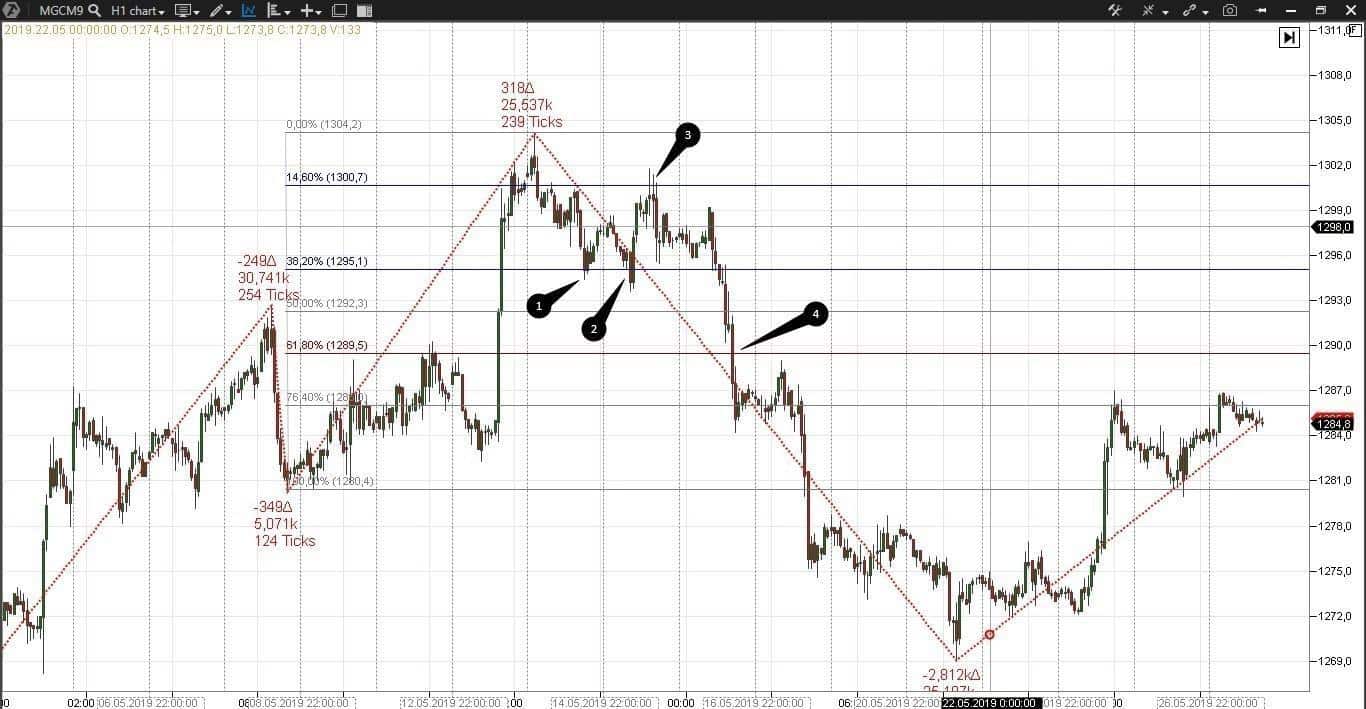 We again built trend lines with the help of the ZigZag pro indicator with 100 ticks setting. The price touched the level of 38.2 in points 1 and 2 and bounced to the level of 14.6. This pattern warns us that the price, most probably, would move to the level of 61.8, which we see in point 4.  The level of 61.8 is a key level. The previous trend is broken when this level is broken.

Extension is a movement towards an already existing trend.

For example, here are the numbers, which are used for extensions by Derrik S. Hobbs, the author of the ‘Fibonacci for the Active Trader’ book:

We added extension levels of blue colour to the correction levels in the following 10-minute E-micro Gold futures (MGCM9) chart. 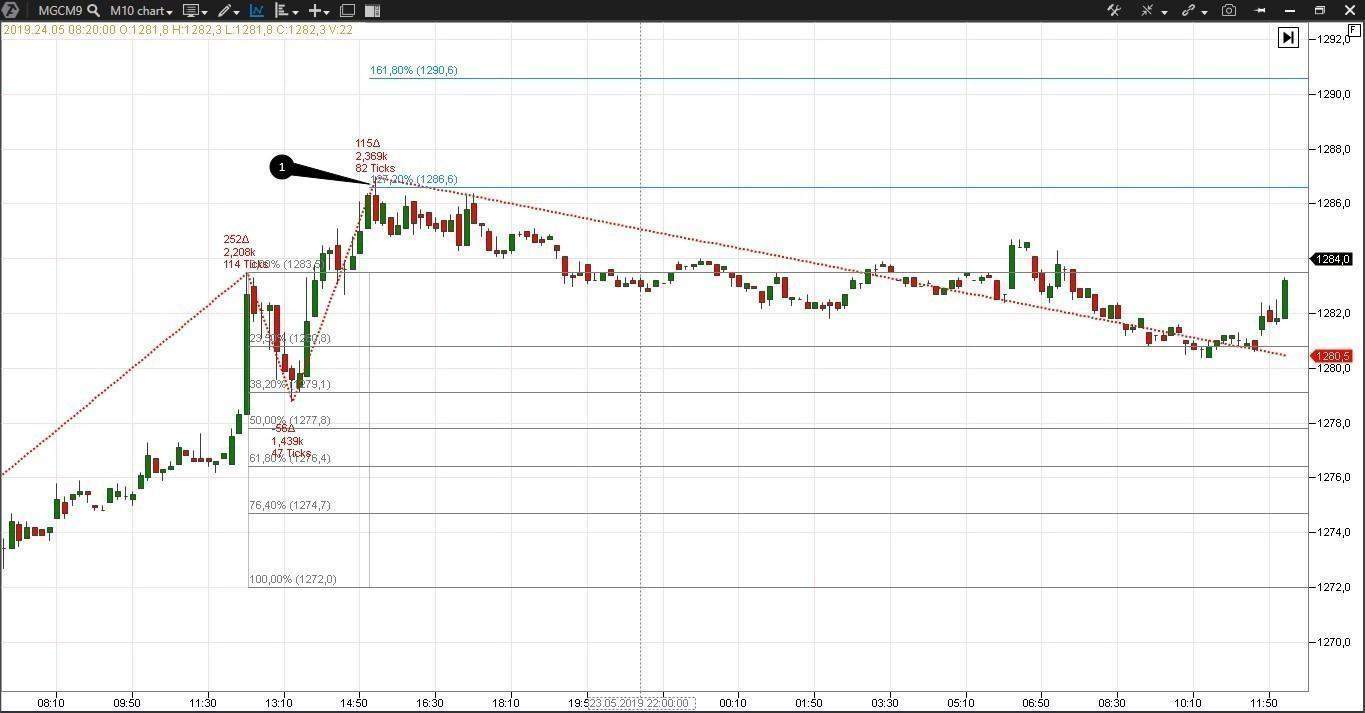 The price reached the extension level of 127.2 in point 1 and bounced back.

Projection is a movement, which consists of two waves – trend and correction. Projection starts in a low or high point where the price reversed. Significant projection levels for Forex:

Projections could be measured in ATAS with the help of the Fibonacci Extensions instrument available in the upper menu. Example in a 4-hour E-micro Gold futures (MGCM9) chart. 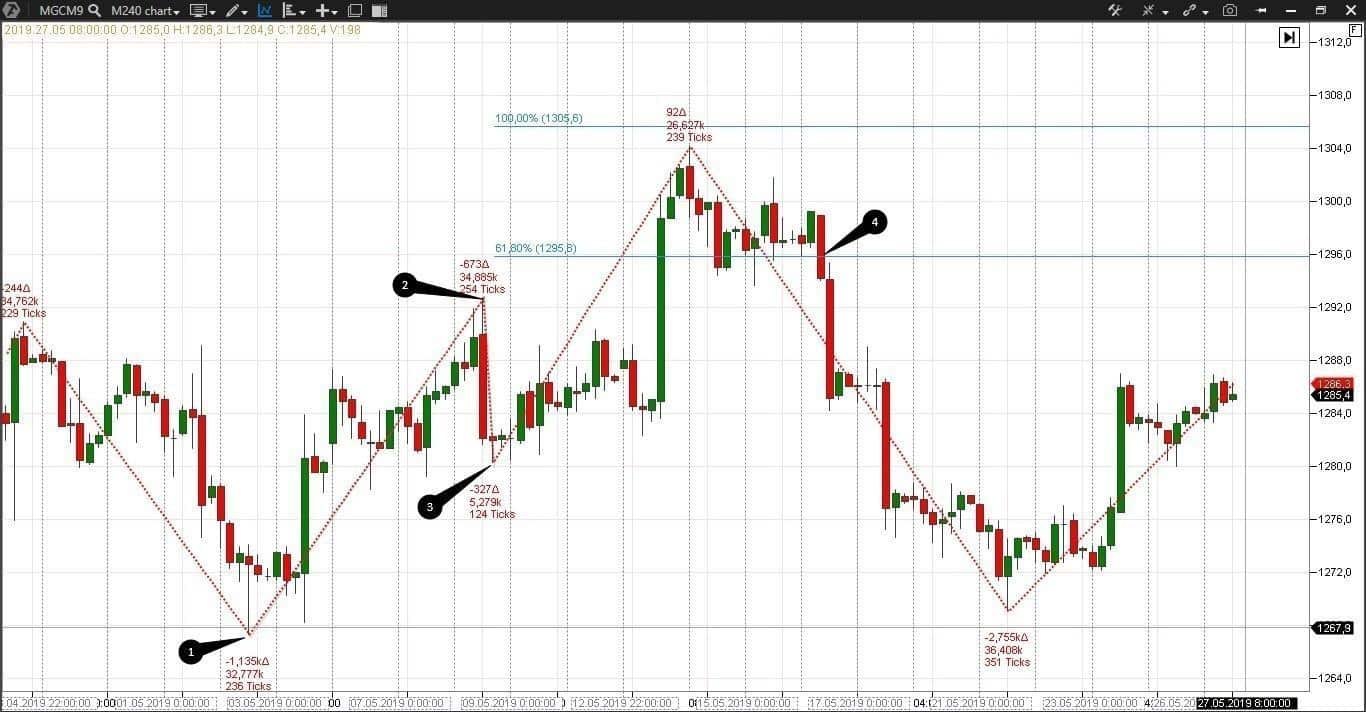 Fibonacci zones are places of accumulation of various Fibonacci retracement levels at one price level. Let’s have a look at a 4-hour E-micro Gold futures (MGCM9) chart. 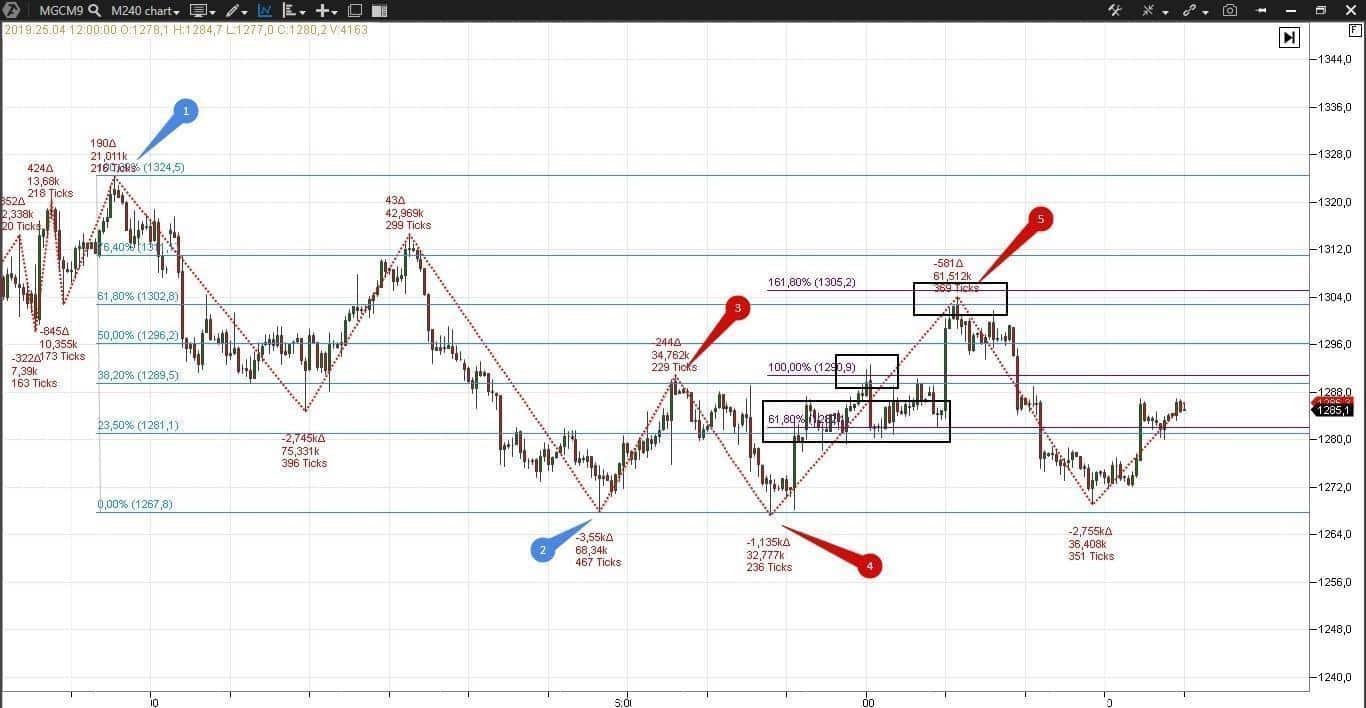 Blue Fibonacci levels are built by a day chart where points 1 and 2 are beginning and end of the correction level. Violet levels are built by a 4-hour chart where points 2, 3 and 4 connect projection levels. We marked the key level of 61.8, from which the price reversed, with point 5. We marked Fibonacci zones, where several Fibonacci retracement levels are near each other, with rectangles. Such levels are of special interest to traders, because the price slows down here and reverses.

Let’s have a look what advantages a trader gets when he combines footprint and Fibonacci retracement levels. Here we have again a 10-minute E-micro Gold futures (MGCM9) chart. 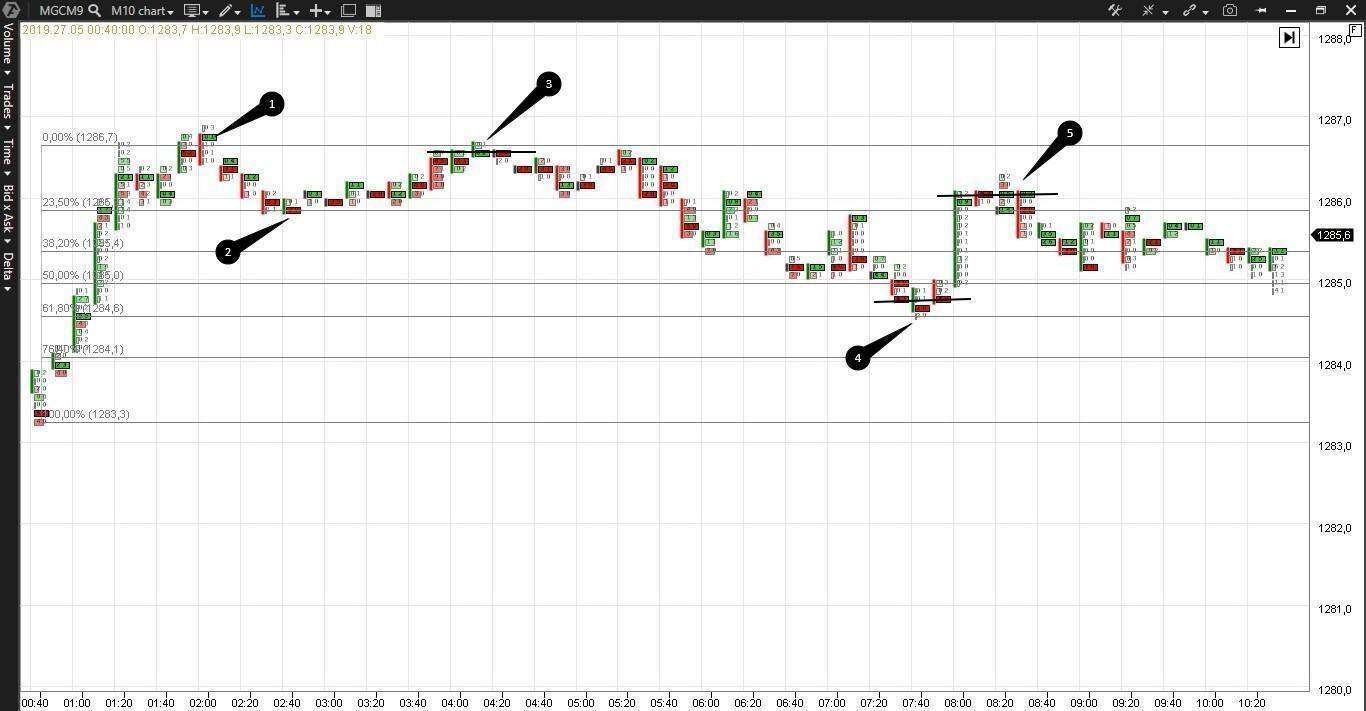 The price reaches the significant level of 61.8 in point 4 and the Virgin Point of Control emerges again. We can see the level of support of coinciding POCs, marked with a black line, apart from these reversal signs.

There is a level again in point 5, but now it is a resistance level, formed by coinciding POCs. This level is a bit above the standard Fibonacci correction level. As you can see, the market activity (visible in the cluster chart) magically increases when the price enters the Fibonacci retracement level action zone. This could be used as a confirmation. For example, while using footprint, Virgin Point of Control and POC, pay more attention to analysis of volume and price at Fibonacci levels. They will add significance to your conclusions. 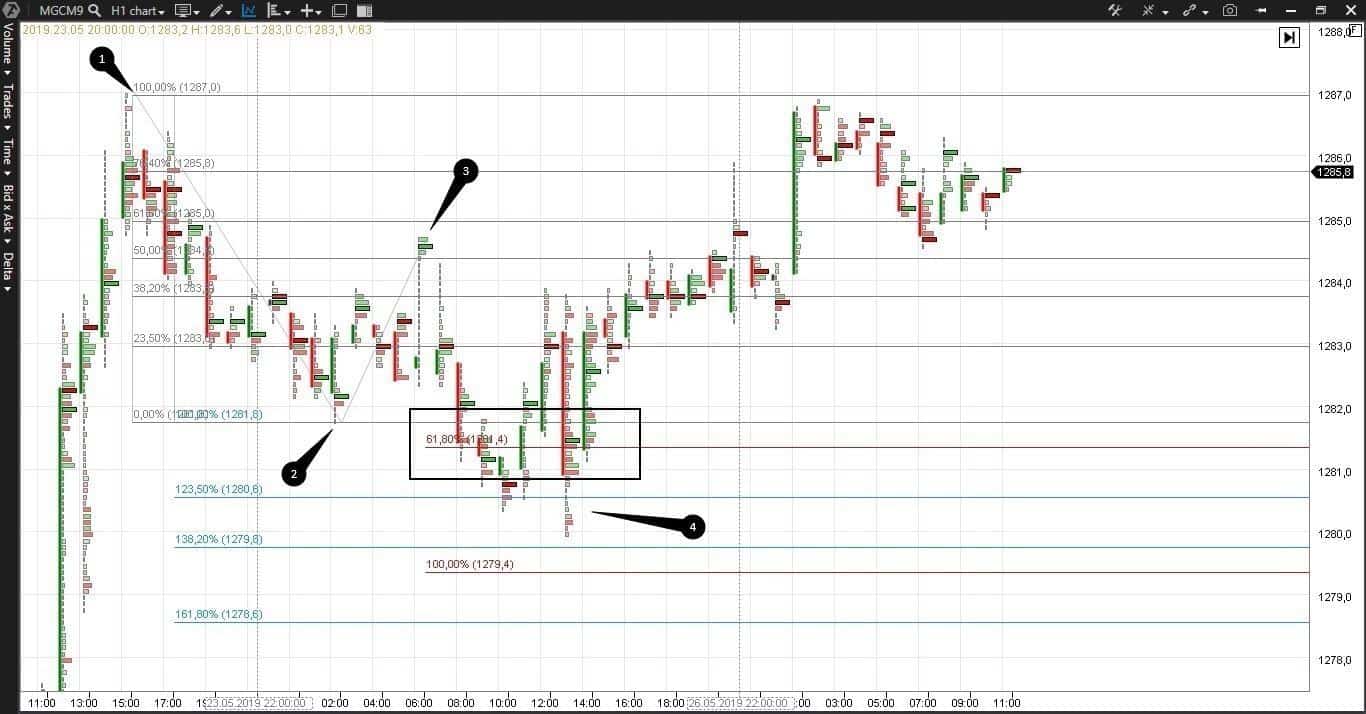 We can see stuck long positions in point 3 in the cluster chart and exhaustion of sells in point 4. An experienced trader can identify by sight that the price is at the Fibonacci retracement level and decide to open a long position in the bar that goes after the point 4, when POC starts to move up.

If you want to trade by Fibonacci retracement levels only, we recommend to read:

Trading by levels is an integral trader’s experience.

We use Fibonacci retracement levels, support/resistance levels, VAL, VAH, POC, marginal levels, unfinished auction levels and the day’s highs and lows. You can find any of these instruments and many variants of their creative combining in ATAS.

Fibonacci followers provide arguments that the market is a natural phenomenon. And since these levels are very frequent in nature (we can’t but agree with it), application of Fibonacci retracement levels in trading allows finding harmony with a developing trading structure. 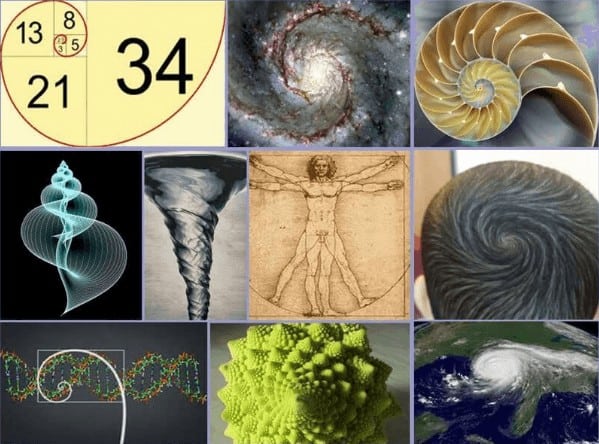 Does it make sense to trade by Fibonacci retracement levels, which were described 800 years ago, or combine them with footprint, deltas and other modern instruments? And how? Every trader can find his own unique answer, which would correspond with personal preferences, in order to add confidence in trading.

We offer you to try ATAS free of charge and make a well-considered decision.

Volatile futures. What is it and how to make money from it?