Indicators make the trader’s life easier and help him to perform his work. For example, a trader could miss important information and a respective indicator would give him a clue about the omission and put a mark in the chart. Also, indicators help in analysis, ‘scan’ history and charts and look for what a trader needs.

The Cluster Search indicator is exactly such a useful assistant. The present article is about this useful instrument for the search of clusters.

Read in this article

How the Cluster Search indicator works

For many decades, a bar (or a Japanese candle) was the primal element of the exchange chart. This element was indivisible.

In the course of development of computing and trading technologies, the market participants got a possibility to ‘look inside’ a bar and see its components – clusters. Cluster analysis allows seeing what takes place ‘in the body’ of every bar with maximum details.

Cluster Search (as the name tells us) searches for clusters within the set parameters and highlights them in the chart for a trader.

How to add the Cluster Search indicator to the chart

You will need to use the indicator manager in order to add the Cluster Search indicator to the chart in the ATAS platform. It could be called from the upper menu (1) or from the context menu, which opens when you mouseover the chart and click the right mouse button. See Picture 1. 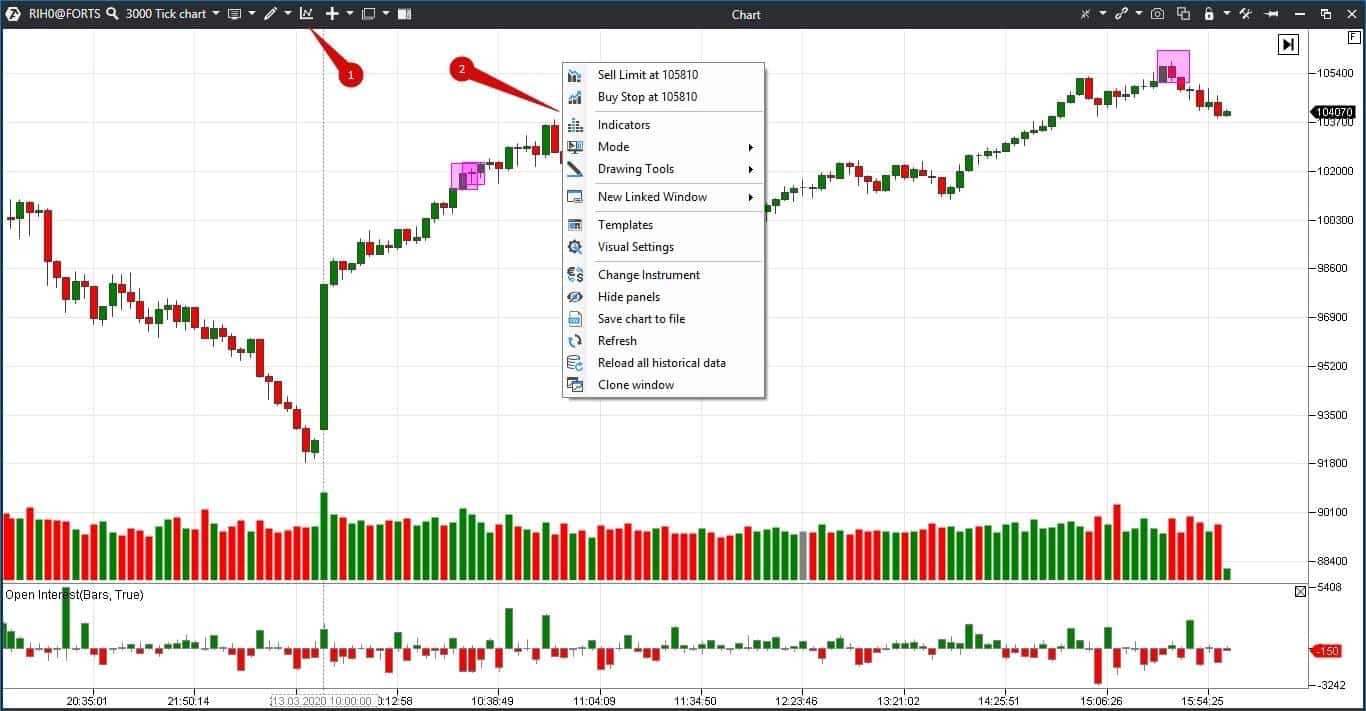 Select the Cluster search in the indicator manager and press Add. That’s it. Bright pink squares (default settings) tell us that the indicator has been added.

How to set up the Cluster Search indicator

Cluster Search has many settings and every user will find a proper variant for his or her trading strategy.

It is important to remember that Cluster Search is not a magic automatic indicator, which will show where to buy and where to sell. In order to use Cluster Search in your work, it is necessary to understand what to search for and why to do it.

As a rule, not the highlighted clusters themselves are important but what a story about the fight between bulls and bears they tell us.

The indicator doesn’t have universal settings. You would need to select them for every instrument and for different times of the day, because the markets are unique. Moreover,  liquidity changes during the day.

What Cluster Search looks for

Cluster Search looks for such clusters, which satisfy the set criteria. For example, the indicator might help to find the clusters where:

Usually, traders are interested not in the ‘special’ orders themselves but in the levels which are formed near such clusters. That is, the indicator helps to identify important support/resistance levels.

Additional filters could be added to the main indicator settings:

Let’s consider an example in the 5-minute RTS index futures (RIH) chart. We added two Cluster Search indicators to the chart and, as a result, violet and lilac squares appeared in the chart.

The first picture: the indicator looks for clusters with the volume of more than 1,000 contracts and filters these clusters out so that: 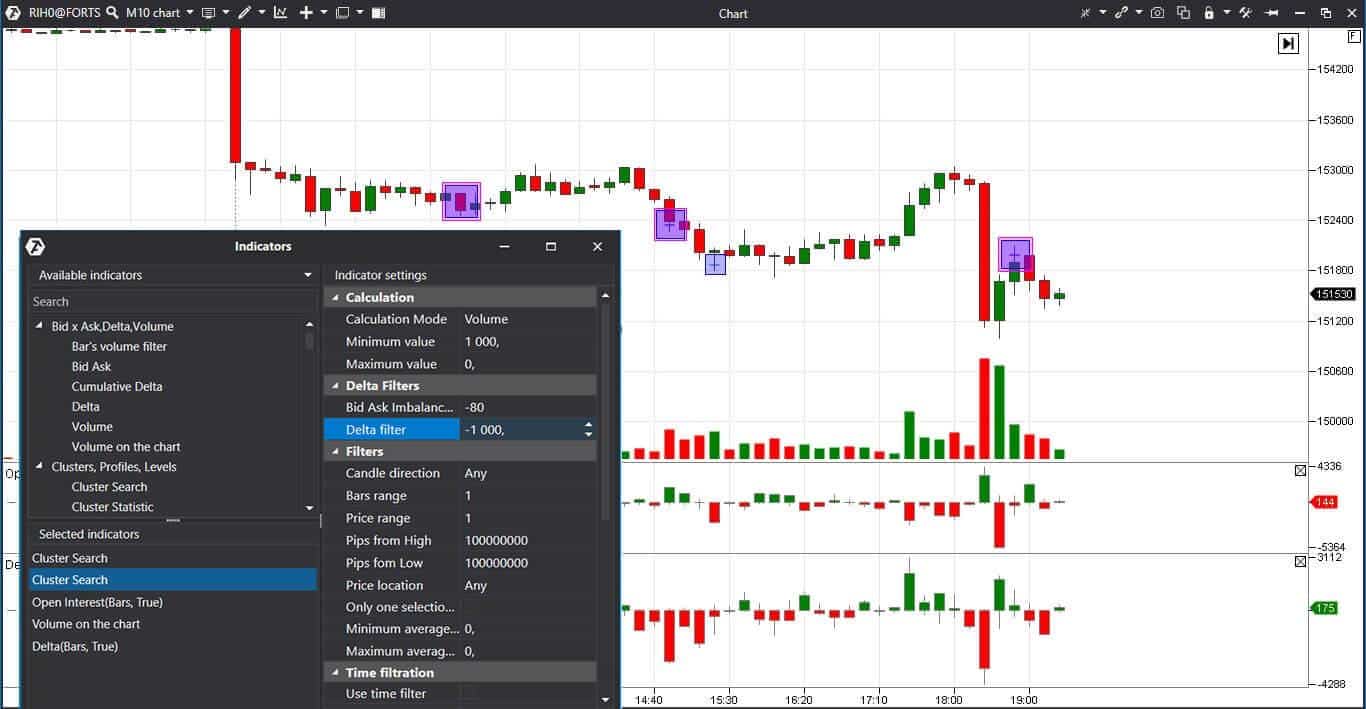 We changed the indicator settings in the second chart in order to look for Bids from 1,000 contracts. Additionally, we want to have more Bids than Asks by 80%. That is, we pursue the goal to see aggressive market sells but set up the indicator differently. See Picture 3. 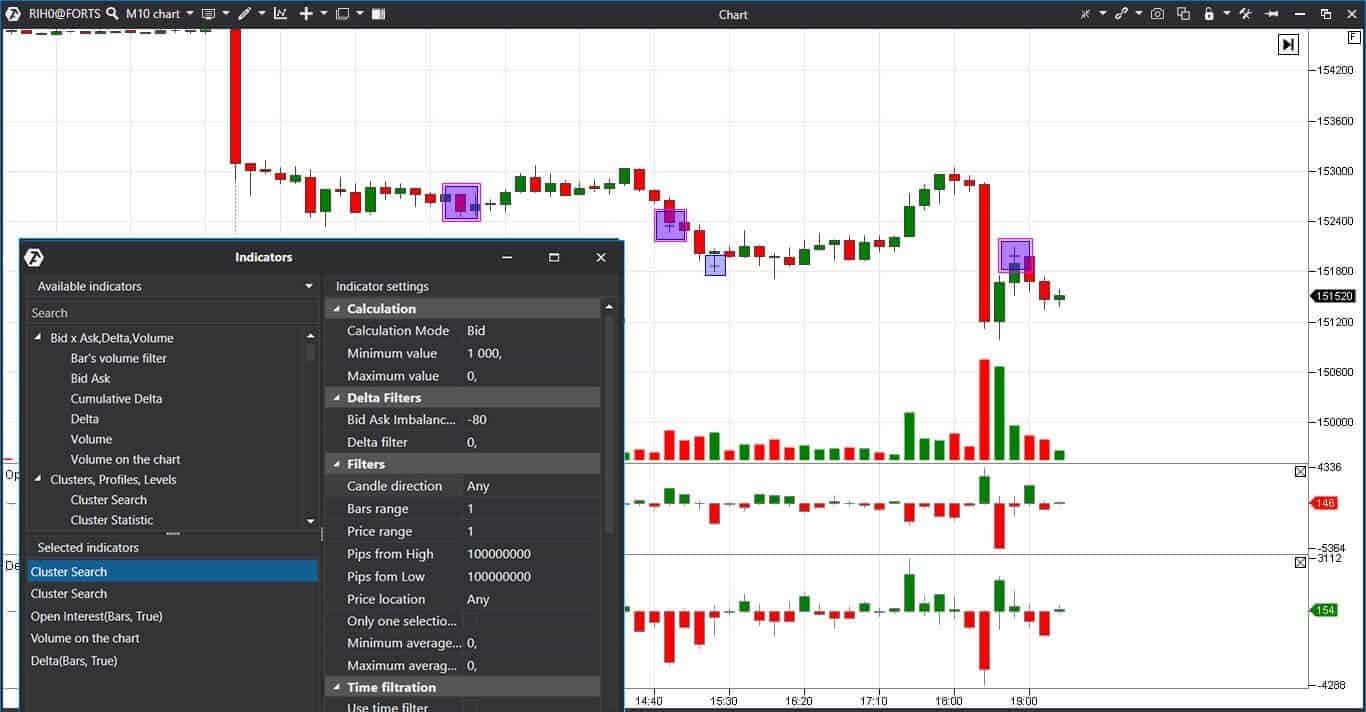 Both settings produced practically the same result since we knew for sure what we want to find, namely – big market sells.

Visually, you may set several indicators in one chart with various shapes and colours. For example, big trades could be shown as red squares while big Delta values – as a green circle.

The indicator may help you to detect maximum levels by Volume and Delta in every bar. In order to understand how to set up the indicator for this, watch this video on our YouTube channel.

Cluster Search looks for trades accumulated in every bar. That is, the set indicator value should be traded with market orders in every cell. These could be small or big trades – the indicator sums them up and then marks the cluster.

Big Trades looks for individual big trades in the Smart Tape and highlights them in the chart. If the aggregation is set, the trades will be united by several prices.

Example of working with the indicator

The stock price was falling from June until October 2019. The price reached the low in October and consolidated. The trend could have reversed but it was risky to accumulate long positions without confirmation. See Picture 4. 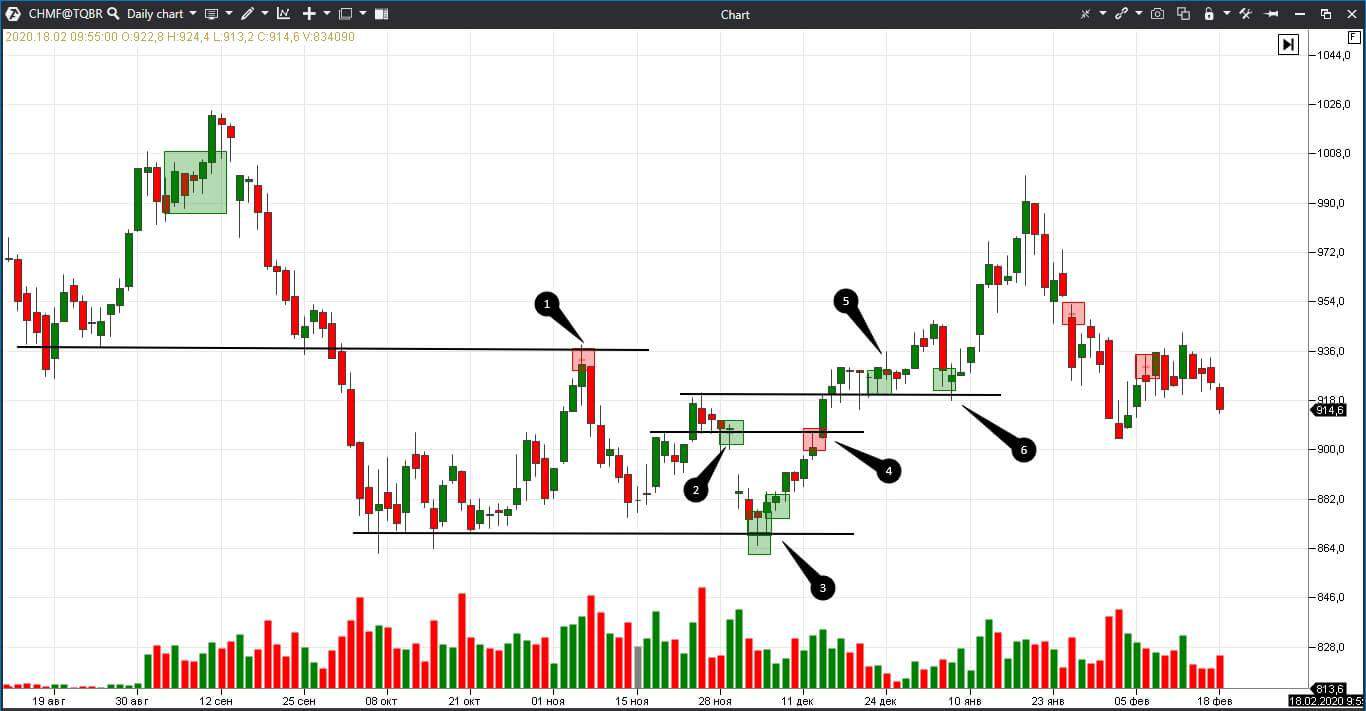 We added two Сluster Search indicators to the chart:

We identified the price low still in October and marked it with a black horizontal line. The price bounced from the low and reached point 1 where Cluster Search showed us aggressive sellers. This level also could have been identified beforehand (because the price already slowed down here before) and the indicator could have been used for confirmation.

Cluster Search very clearly showed actions of the market players. We didn’t follow the indicator signals blindly, but analyzed the probabilities of the price growth or fall. Understanding of what takes place inside every bar is a competitive advantage of a trader.