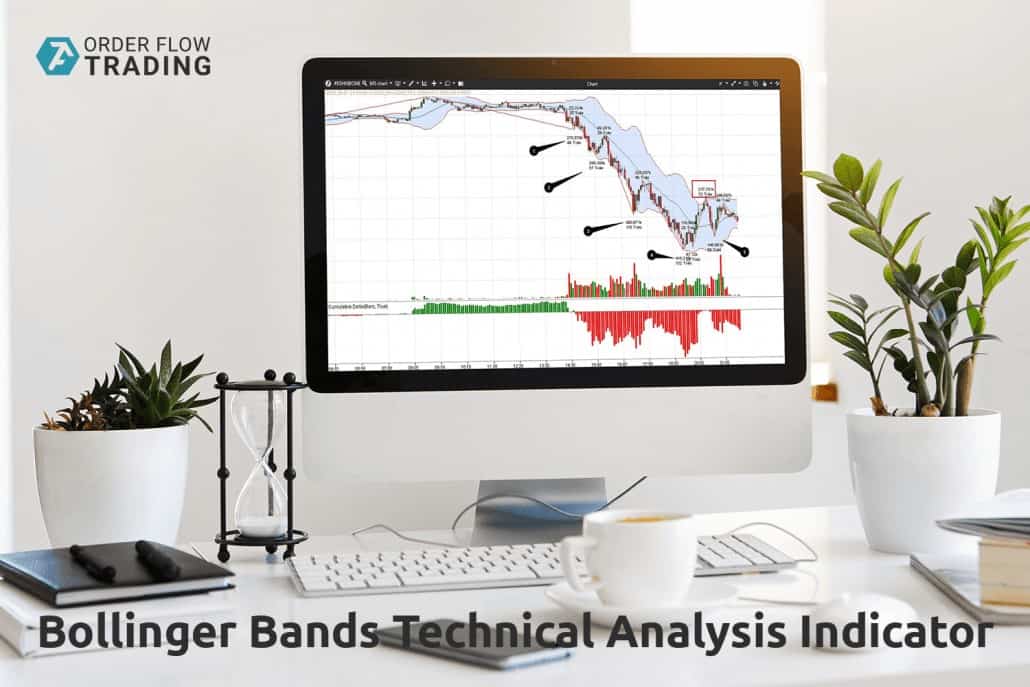 We start a series of articles about technical indicators. In this article, we will tell you about Bollinger Bands. They are better known as the Bollinger Bands indicator or just BBands.

About the indicator developer

John Bollinger worked as a financial analyst and technical analysis specialist. He was the chief market analyst in the Financial News Network and, when it was closed, started to work in CNBC.

Investors and traders know John as a developer of a technical analysis indicator known as ‘Bollinger bands’. This (already classical) instrument is included in practically all packages of trading and analytical software.

The ‘Bollinger on Bollinger Bands’ book was published in 2001. You can find a lot of useful information on the official web-site, dedicated to the indicator. 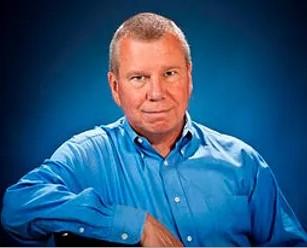 Story of a trader John Bollinger

Bollinger started his trader’s career in 1970. Initially, he acted as a fundamental investor but was disappointed with the results. Then John decided to combine fundamental and technical analysis.

At the first stage, John selected companies by their fundamental characteristics. At the second stage, he used the technical analysis to decide whether he would buy their securities. John bought one of the first mini-computers to increase efficiency of his work.

The story of indicator development

Application of trading bands in technical analysis has a long history. Trading bands are lines (or strips), which are built higher or lower than some central axis. Usually, a moving average serves as a central axis.

Bands were not always symmetrical. Trading bands were mentioned for the first time in 1960 when the Twin-Line Chart of Wilfrid LeDoux was patented. The main problem of twin lines was identification of a distance between the central tendency and trading bands. Some analysts identified band boundaries by highs and lows of the prices at a certain period of time. Others used the parallel shift of the upper and lower bands for a certain number of percent from the central line. They had to draw these lines manually or constantly adapt to the current market state.

Bollinger believed that the band width should be identified by the market volatility. He identified experimentally after computer modelling that the use of a standard deviation for measuring the band width shows decent results. Then he decided that a standard deviation should change together with the average price change. His bands show relative highs and lows of the price.

Bollinger worked as an investment analyst at that time. One day he was invited to a TV show where he showed charts with his bands, which still had no name. The TV host Bill Griffeth asked him how these bands in the chart are called and Bollinger answered immediately that these were Bollinger Bands.

How to set the Bollinger indicator

How to use Bollinger Bands in trading

Since BBands is a technical analysis indicator, the bands could be used for finding reversal points or chart patterns.

Double-top (“M”) reversal pattern – the first high is above the upper boundary of the band or touches it, while the second high is inside the band. Triple-top patterns occur more often than double-top ones. There should be a momentum decay at the classical peak. Traders call these patterns head and shoulders or double/triples peaks.

Double-bottom (“W”) reversal pattern – the first low is below the lower boundary of the band or touches it, while the second low is inside the band. Bottoms are more pronounced than tops in the charts. Their formation, as a rule, takes less time than peak formation. It is connected with the traders psychology – they act more actively at market bottoms than tops.

Trend strength confirmation pattern or ‘walking the band’. For example, in the event of a strong price trend movement, the prices may touch the band many times and close during a number of days above the band boundary. Bollinger calls such touches ‘walking the band’. The fact of touching the upper or lower boundary is not a signal for a trader because he has to take into account the general picture. In the event of a strong trend, the average line serves as the support. 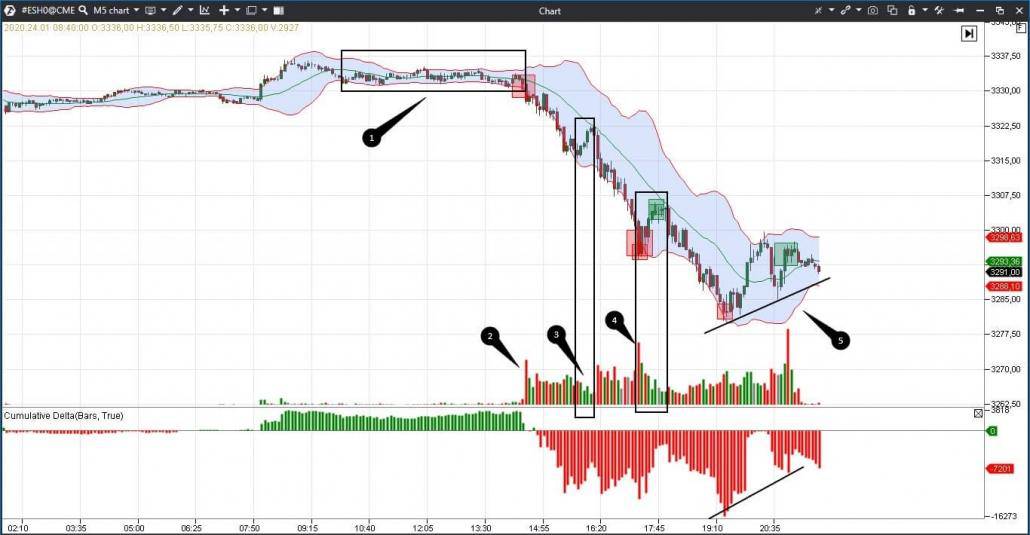 Apart from the Bollinger Bands, we added the Cumulative Delta,  Big Trades and Volume indicators to the chart.

We already considered a 5-minute E-mini S&P 500 futures chart example. We used Big Trades and Cumulative Delta as confirmation indicators. Bollinger recommends in his book to use volume indicators for confirmation, that is why we will add the ZigZag pro indicator to the chart. 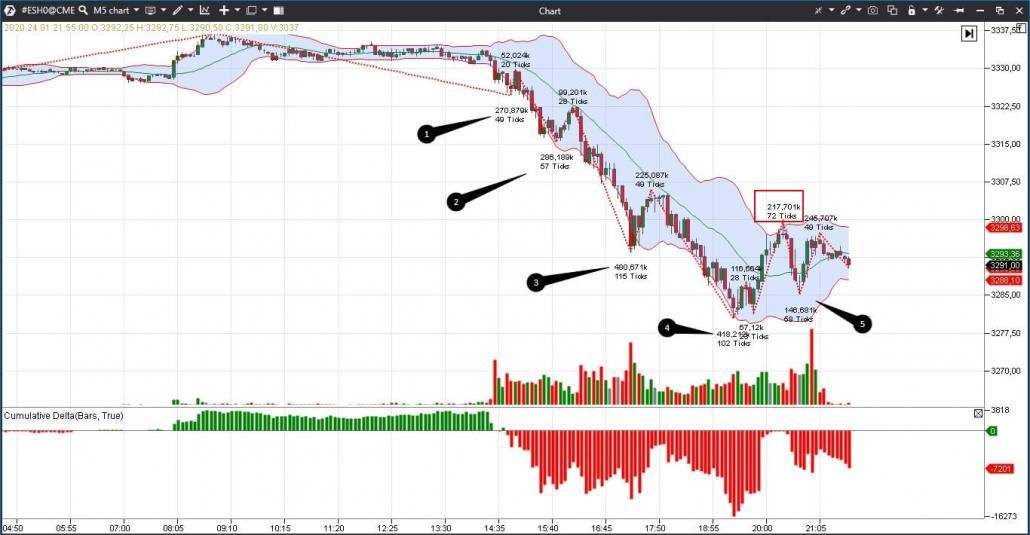 We see consolidation and very narrow Bollinger Bands in the upper part of the chart.

Bollinger Bands could be used not only for the price charts but also they could be ‘superimposed’ on other indicators, for example, RSI (Relative Strength Index). Bollinger recommends the following settings: 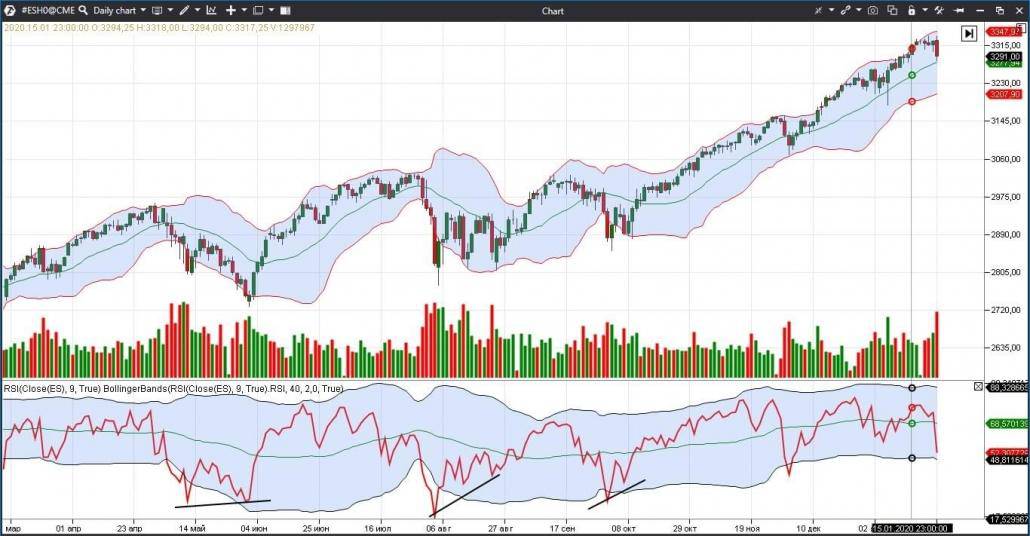 Bollinger Bands identify overbought/oversold areas for the RSI indicator better than standard settings of 30/70. The same rules act here as in the price charts:

Main conclusions with respect to the Bollinger Bands

How to select stocks in the premarket. Finding markets that enter the active...