You are here: Home1 / Fundamental analysis2 / What TikTok has in common with the Gingerbread Man. Why gold and stocks...

What TikTok has in common with the Gingerbread Man. Why gold and stocks fall. What important words Musk said on the Battery Day. 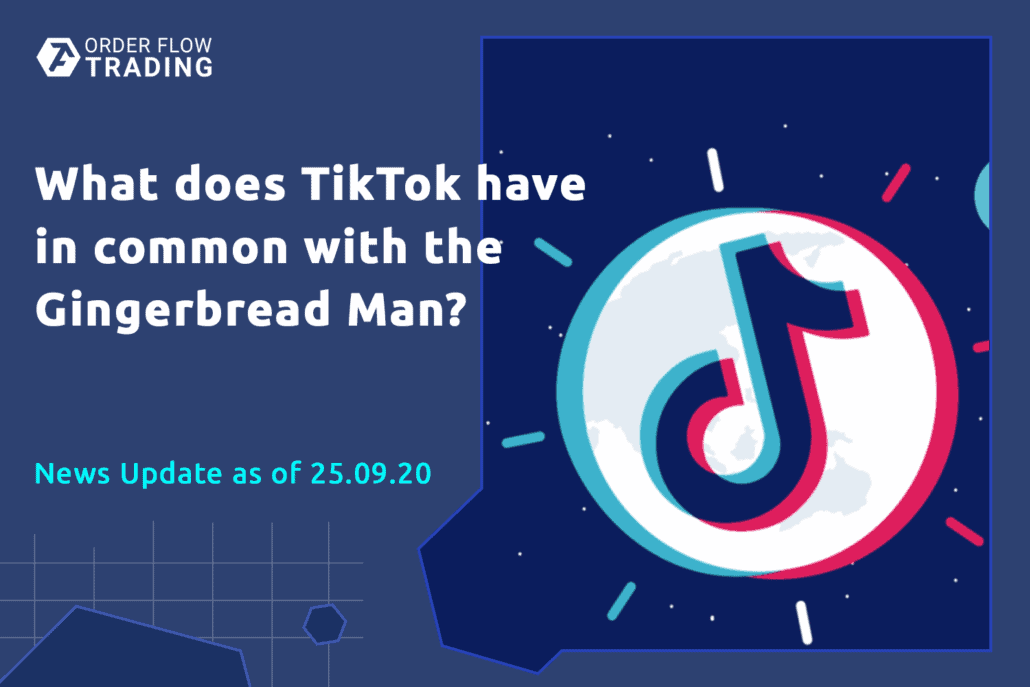 Retracement moods continued in the world financial markets last week. Besides, the sell-out nature on all fronts on September 23 from gold and raw materials to top stocks resembled March 2020. It was also interesting on the corporate front. Tesla presented a big breakthrough plan in the field of storage batteries. A new turn took place in the destiny of the TikTok international subdivision, which aims at repeating adventures of the Gingerbread Man.

Sell-outs in the world markets: for how long

Publication of the Purchasing Managers’ Index (PMI) during the current week in industrial countries from China and Germany to the United States will show the production sector state in the world. Investors will wait for Friday, when, probably, the most important statistics of the month – Nonfarm Payrolls – is published, with special attention. We will learn whether the investors’ fears that the US economic recovery got stuck are just. Volatility splashes are possible.

Sell-outs in the world markets: for how long

The main topic of the week is retracement continuation in the world markets. Besides, events of September 23 resembled March 2020 very much – investors got rid practically of all asset types. Especially of those, which managed to grow significantly from the beginning of the year.

Thus, the fall in the technology sector, led by Apple and Google, continued, the euro was falling in the currency market and not a stone was left standing on silver in the precious metal market. The futures on the main ‘protective’ asset – gold – didn’t protect anyone from the retracement and also fell by more than 2% as well breaking the uptrend. 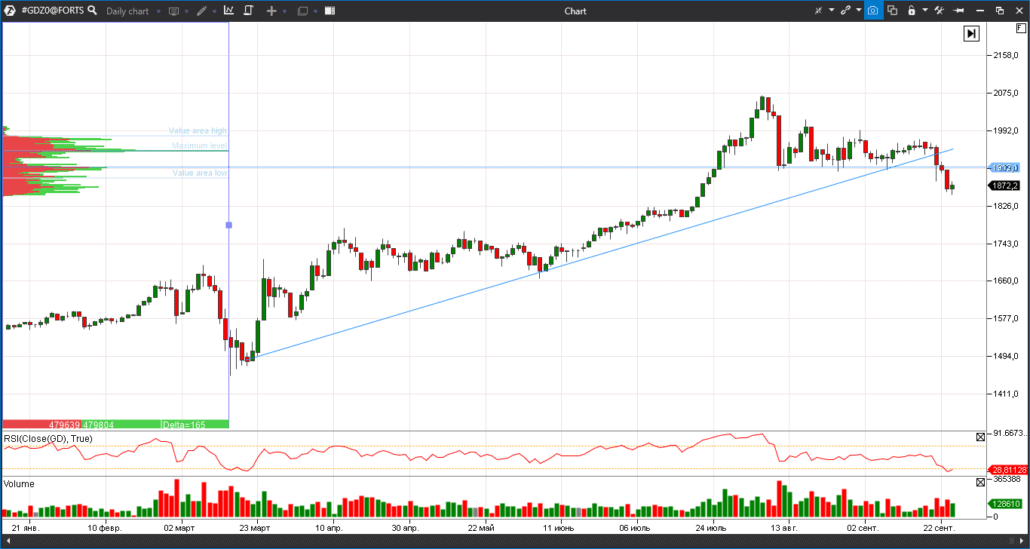 So, what happens with the markets? One of the fundamental reasons is revision of the US economy forecasts for the fourth quarter. Thus, the Goldman Sachs investment bank decreased the US GDP growth forecast from 6% to 3%. One of the key risks is the US Congress inability to reach an agreement about a new package of the budget support of the economy.

The unemployment news also does not look good – the number of jobless claims stopped to fall since the middle of August, which testifies to the fact that the US economy got stuck. On Thursday, this number turned out to be worse than the forecasted – 870 thousand claims against 840 thousand forecasted. Around 200-300 thousand claims a week had been filed before the crisis.

Despite the contradictory economic data, the majority of analysts still expect that the markets continue to grow in the nearest weeks. The US FRS continues to print money and this is still the main market factor.

Owners of the TikTok social network from the Chinese ByteDance holding intended an interesting game: how to sell its international subdivision profitably so that to make more money and not to lose control over it.

We want to remind you that initially they didn’t plan to sell it if it were not for the rage of President Donald Trump. In the breaks between making posts on Twitter, Trump sailed into the social network as if for the Americans’ personal data ‘leak’ to the ‘enemies’ in the Chinese Government. The White House practically forces out the TikTok owners to find reliable owners in the United States under the threat of a complete business lock out. 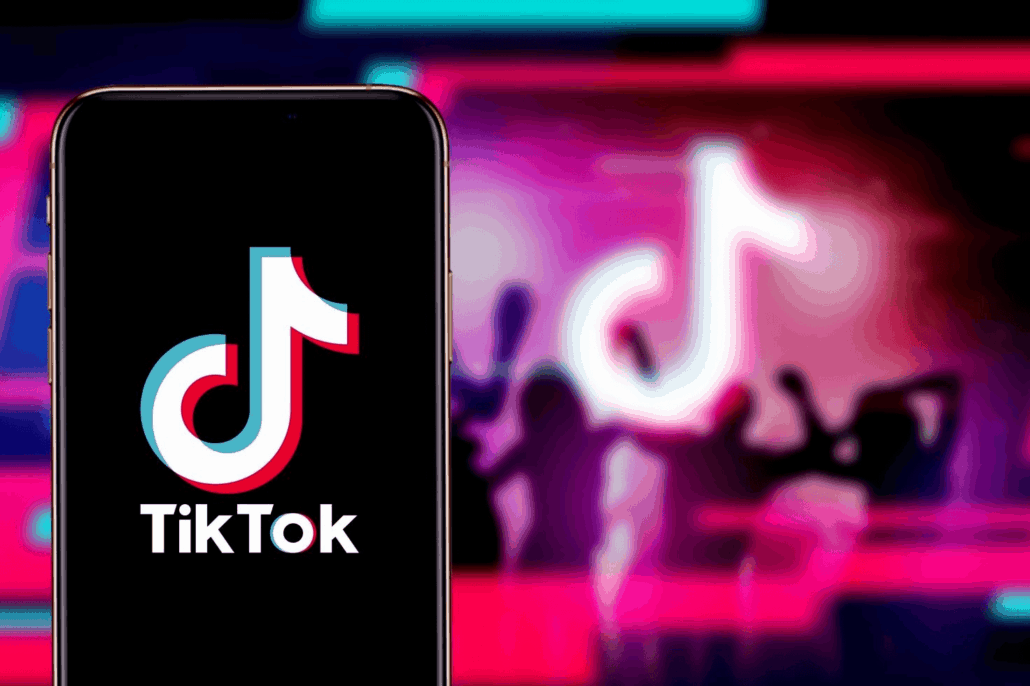 The Chinese conducted long and cordial negotiations with Microsoft. They even publicly discussed the amount of this deal in USD 30 billion. However, they failed to reach an agreement – senior comrades from the Chinese Communist Party got involved. A variant of cooperation with the Oracle consortium and Walmart (a strange union of the server equipment manufacturer and retailer) turned up. There are rumors that they received the right for the social network code audit and buying out a part of stock. Oracle stock (ORCL) even holds better than the market on these news. 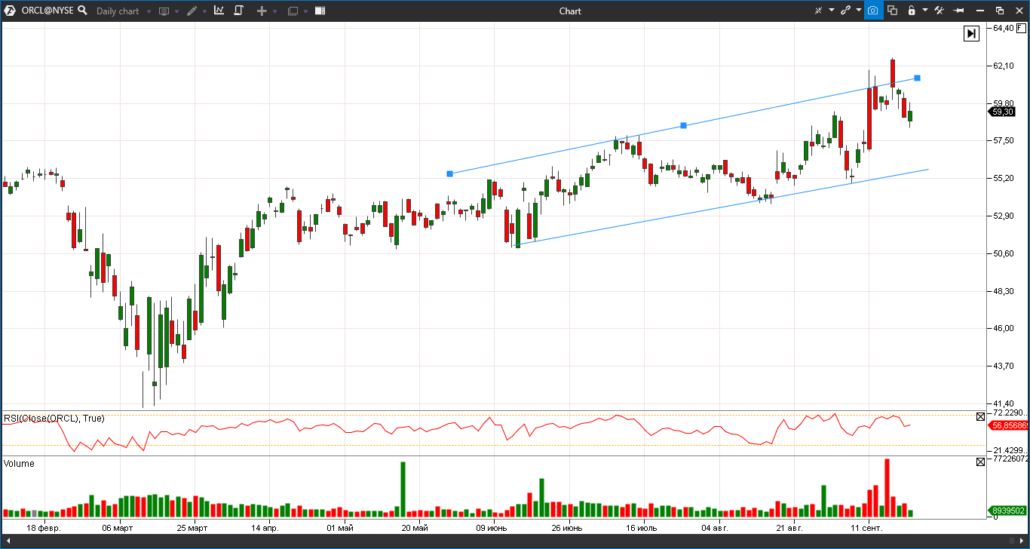 The story got an even more unexpected twist the previous week. TikTok Global promised to make an advanced payment into the US budget in the amount of USD 5 billion and announced IPO plans in this country. It’s interesting what Trump thinks about all this and could the advance payment be a buy off the persistent attention of feds?

Elon Musk follows the route of the legendary Steve Jobs. The businessman decided to present the Tesla key technology novelty products in the format of a large-scale international event. The show was named the Tesla Battery Day. The presentation was conducted on September 22 and new company plans were announced about development of new batteries, which are designed to strengthen Tesla leadership in the market.

First, Musk announced a complete refusal to use cobalt in production. The problem of its use is not only in its scarcity and high price but also in the fact that slave labour is used in its production in third world countries. Besides, the capacity will not be compromised. On the contrary, there are plans to significantly increase the battery capacity.

Second, Tesla plans to refuse from the complex chain of the battery suppliers and build yet another plant in the United States, which would make the cars significantly cheaper and increase production volumes. In the future, the Tesla car should not cost more than USD 25.000 and the number of produced cars should increase to 20 million a year, given that the current number is 370 thousand.

Despite the bright prospects, the Tesla stock responded to the news with a fall. Investors were disappointed that construction of the new plant will be completed at the end of 2022 at the earliest, and investors already included the Tesla total superiority on all automobile fronts already here and now.

Meditation for trading. How to avoid thoughts that interfere with achieving...
Scroll to top -->
XThis site uses cookies. By continuing to browse the site, you are agreeing to our use of cookies.Cookie Settings Read MoreReject AllAccept
Manage consent