How a big position is accumulated

In this article, we will try to put ourselves in the shoes of the manager of a big capital, so that we could read the chart better being a regular trader.

It is not difficult to notice a splash of volume in the chart, but it is not a trivial task to understand what it means. So, we will speak about how to solve this task.

It is very difficult for big investment funds, which manage billions of dollars, to permanently generate a significant profit for such big capitals. In order to provide their customers with a competitive yield, the capital managers have to handle very big positions. And it is more difficult than trading a couple of E-mini contracts.

So, how should major market participants accumulate big positions at the most profitable prices, staying barely noticeable and having sufficient liquidity?

You need several factors for this:

If you observe a band with clear boundaries, which stays steady for a long time, in the market within a narrow price range, there is a high probability that a position accumulation takes place before a strong trend.

How does a trend end?

We will use the ATAS trading platform for analysis. We will use its instruments to analyse:

So, we take the EUR futures as an example. There is a steady bearish trend in the daily chart: 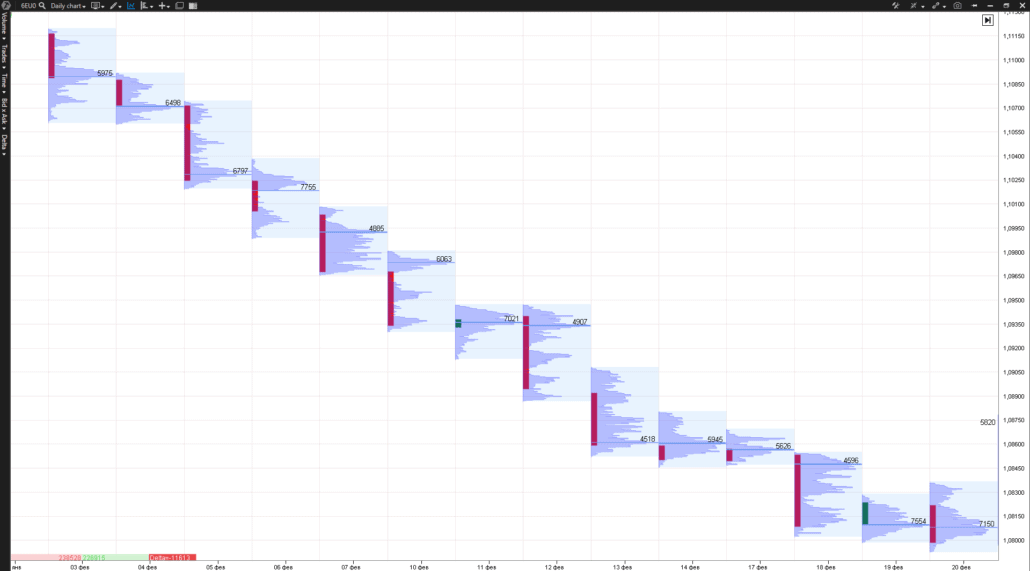 Characteristics of a steady downtrend:

What could be a warning signal of the trend completion:

All these signs tell us that, perhaps, a major market participant stops to move out of the current trend and starts to accumulate his position for the reversal movement. 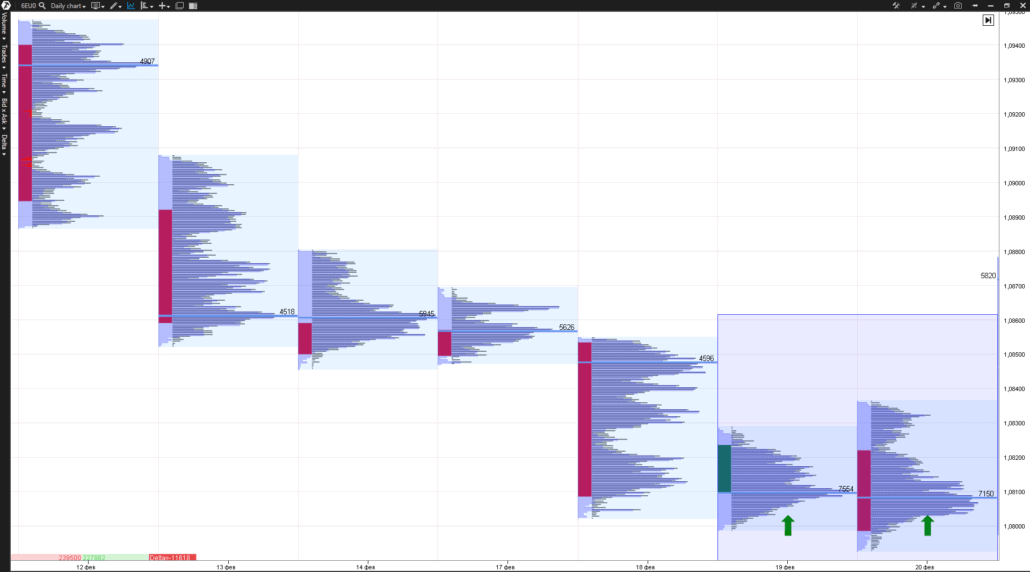 Every such stop in a trend could be a reason for you to be more careful, since a reversal probability increases. Often, the best solution in such cases would be to shift the stop loss for profit protection and not to open new trades along the trend.

So, how does a market reversal take place?

A reversal at the market peak takes place similarly.

Further on, a new trend may immediately start to develop or the price may go into a flat for continuation of the position accumulation process.

How does a position accumulate at the top (bottom) of the market?

However, it is also important to understand that when we speak about the market, we always speak about probabilistic events. Events may develop one way in 60% of cases but the scenario could be absolutely different in 40% of cases.

However, if you understand the market development and you are able to forecast it with the 60% probability, you can make money on a stable basis if you also add the correct risk management and capital management.

So, how does a position accumulate at the market peak? 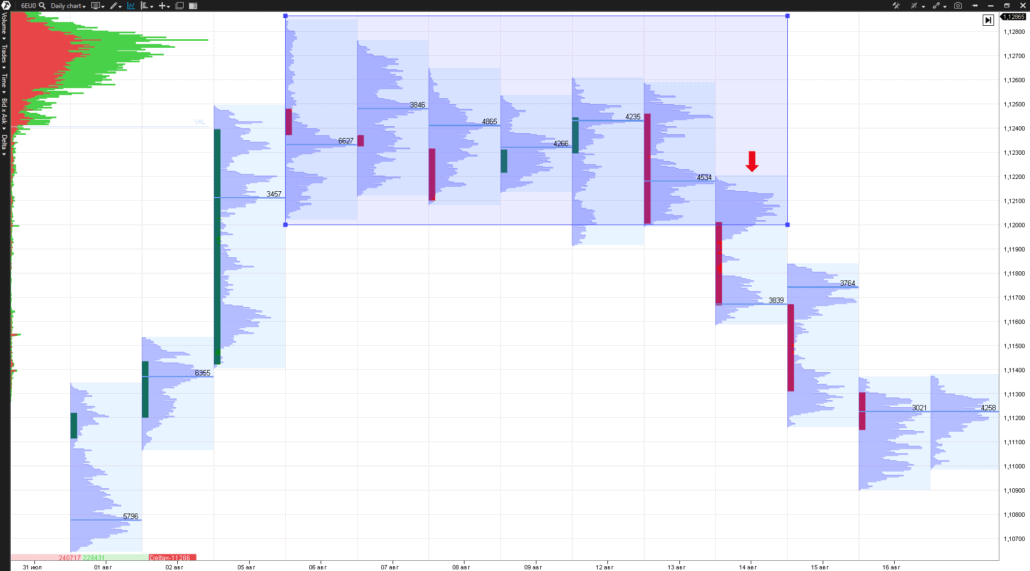 When a position accumulation takes place at the peak, we can see in the chart:

It would be a proper thing to apply intraday ‘band’ trading strategies, which look for entry points on the breakout from levels, during the periods when the range boundaries are clearly seen. However, you shouldn’t set long-term goals with this approach but should exit from trades on the other side of the accumulation band.

Daily trend strategies will not work properly during accumulation, since there are no big movements in the market and false breakouts are possible. That is why it is better not to trade by daily strategies during such periods.

How a new trend starts

The price moves out of the ‘band movement’ and a new trend starts after a sufficient position has been accumulated. 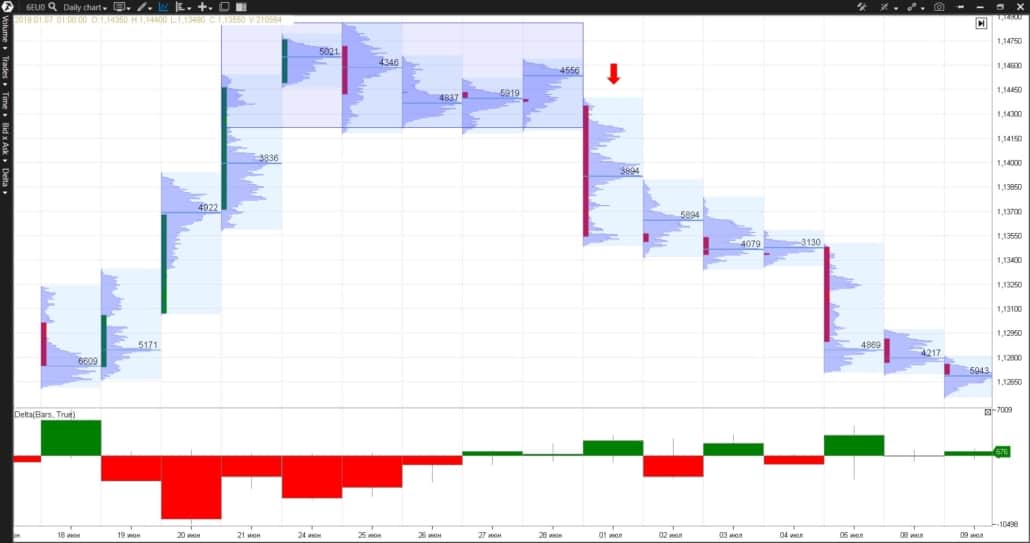 How a new trend starts to develop: 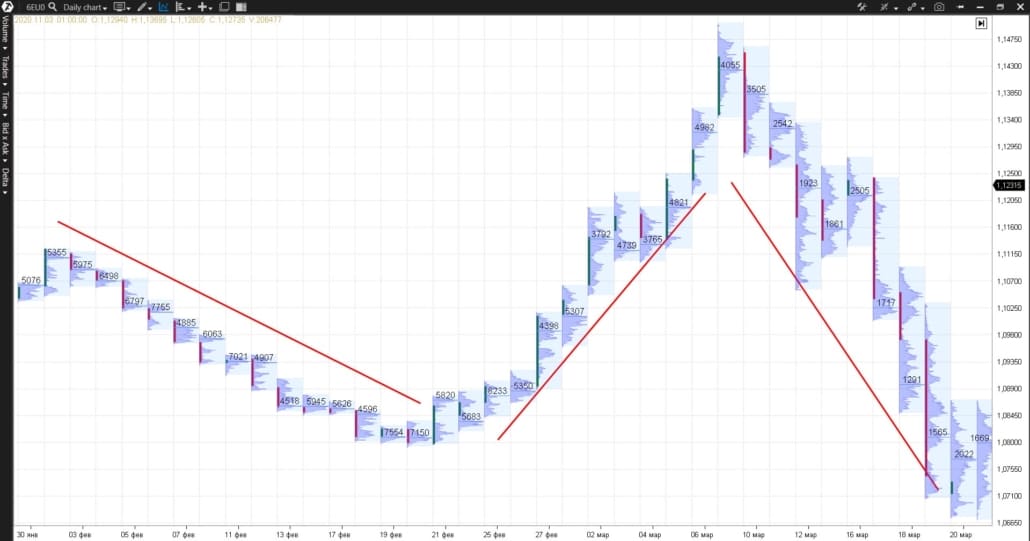 Quite often, strong and steady trends occur in the volatile market and holding the trade during the whole trend could bring a significant profit. That is why, it is good if you have daily trading strategies, which follow the trend, in your trading strategy portfolio.

In order to be a steadily successful trader, you need to:

When a position accumulation takes place in the market, then you’d better hold back from trading along the trend on the basis of daily charts and trade during the day on the basis of reversal strategies.

If a new trend started in the market, you should trade only in the trend direction, trying to hold your position as long as possible.

What does Open Interest cover? Practice of use of the OI Analyzer indicator:...