7 features for the fundamental analysis of the fx market 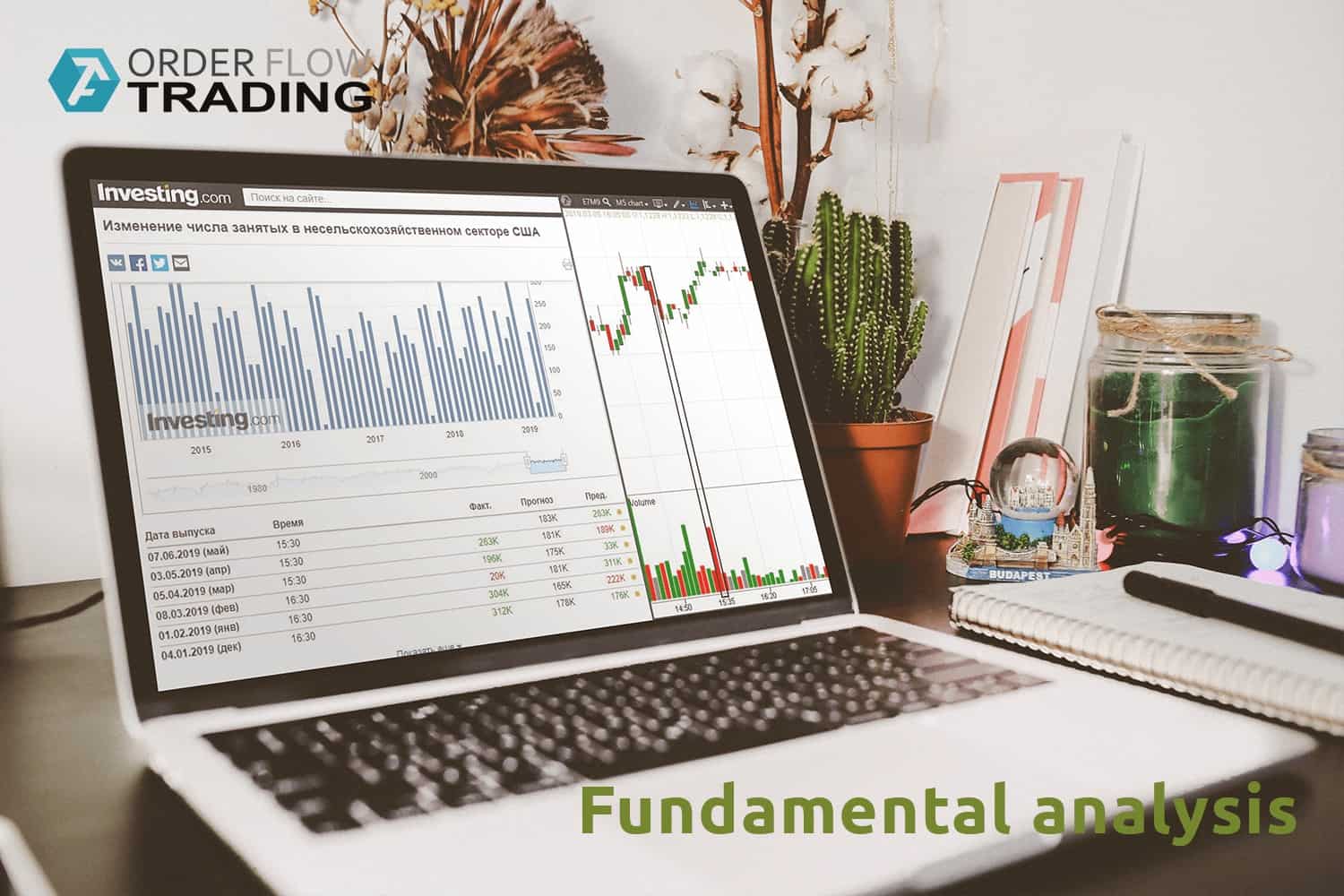 We found this brilliant definition in one of the fundamental analysis textbooks.

Fundamental analysis is what traders do not see on the screens of their terminals and in the charts.

In this article we will discuss why traders need what they do not see and how the invisible hand of fundamental analysis influences price movements.

What fundamental analysis of the currency market is.

Fundamental analysis of the currency market is an assessment of a change of a currency value on the basis of the economic situation, financial policy of Central Banks, availability of cash in circulation and other macroeconomic indicators.

The currency market differs from the stock one with:

Basic currencies in the Forex market are USD, EUR, JPY, CHF and GBP. It is believed that the currency value is identified by demand and supply and is in ‘free floating’. Although, there are exceptions, like, for example, it has been with the Turkish Lira (TRY) recently. While TRY was falling, the TRY/USD rate was rather strictly regulated by the government.

One can trade currencies not only in Forex, but also in the forward exchange market (futures).

Trading futures currency contracts in the forward market is more interesting for traders because:

Theoretical grounds and indicators of the fundamental analysis.

Let’s restore the macroeconomic theory in our memory before we discuss basic fundamental analysis indicators. This section could be boring. If you know what GDP, unemployment and trade balance are and how they influence currency exchange rates, go directly to the next section.

Fundamental data could be conditionally divided into several big groups:

It is impossible to assess the influence of analytical data on currency prices without taking into account business cycles. Economy of any country develops in cycles:

Economic indicators of the fundamental analysis behave differently at different stages of the business cycle. Some indicators are late, while some are ahead and warn about cycle changing. The state tracks and forecasts cycles.

Changes of indicators for a certain period of time or in comparison with other countries’ indicators, rather than absolute indicator parameters, are important for the fundamental analysis. Data, which significantly differ from the previously forecasted indicators, are of special importance.

Let’s consider each of the factors in brief.

Central Bank is the main state organization in a country. Central Banks ensure stability of national currencies. They have various instruments of influence on demand and supply. The US Central Bank is called the Federal Reserve System or simply the FED. Central Banks conduct different monetary policy, depending on the state of the economy and business cycle:

Trade Balance is the difference between export and import. Theoretically, if export is bigger than import, the inflow of foreign currency into the country grows and demand on the national currency grows too, since it is needed for exchange. Consequently, the national currency exchange rate gets stronger. If import is bigger than export, it is the opposite and the national currency gets weaker. We said ‘theoretically’, when speaking about the trade balance, for a reason. In real life, macroeconomic factors mix and influence each other, that is why it is impossible to accurately calculate the trade balance influence on currency exchange rates. However, broadcast of news about the growth of a trade deficit of international trade could result in the exchange rate fall. The trade balance also reflects demand on commodities abroad. The low cost of the national currency is good for exporters. They have an advantage in the global market, since their commodities are cheaper. Consequently, the low cost of the currency results in export growth. That is why Central Banks could decrease the currency value for increasing export. Export has a significant influence on economic growth of a country.

Stock indices behaviour or demand on stock also influences the currency exchange rate. Permanent buying interest in stocks, nominated in a certain currency, increases the exchange rate of this currency.

Check Russian data on the website of the Central Bank of Russia.

Inflation – growth of inflation decreases purchasing capacity of money. Central Banks fight inflation by means of increasing interest rates. This way they remove some money from circulation, because it becomes more profitable to invest into financial assets. As soon as some money is invested into financial assets, the purchasing capacity goes down and inflation also goes down. Growth of money supply increases inflation. Inflation in the sphere of services lags behind inflation in the commodity markets by 6-9 months. The higher the inflation, the lower the unemployment level is. Inflation in the US is measured with the help of two indicators – CPI and PPI. We will consider them in more detail in the following section.

The volume of industrial production (IP) grows and the national currency becomes stronger along with export. The business cycle could be tracked by this indicator.

Let’s consider now the key US indicators, which influence the USD exchange rate, in more detail.

Report on unemployment in the nonfarm sector – Nonfarm Payrolls.

We marked traders’ reaction to the publication of data on May 3, 2019, with a rectangle in the 5-minute E-mini Euro futures (E7M9) chart below. The data were not just good but much better than the forecasts. The EUR/USD currency pair price jumped down on increased volumes during a short period of time. However, it is rather difficult to see such pronounced reactions nowadays, since political factors and a combination of other economic factors exert influence on currency exchange rates. 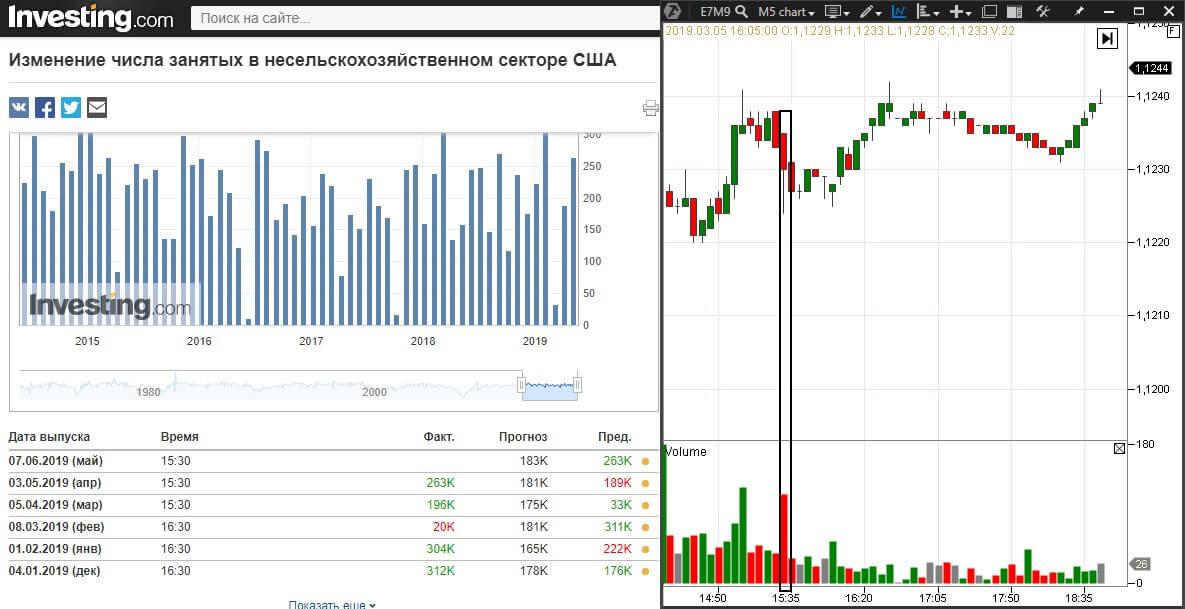 A number of permits issued for building purposes – Building Permits.

Producer Price Index (PPI) is the indicator of the wholesale trade of products in the domestic market.

Use of production capacities (CAPU) is the general output (total productivity). The indicator is closely connected with business cycles and allows forecasting behaviour of Central Banks in difficult moments. Takes big values during recession.

Durable goods orders is the indicator of confidence of a consumer in the future and willingness to spend money on expensive commodities. The growing number of orders stimulates production.

Average Weekly Hours is one of the business cycle indicators. It goes down at the initial stage of the fall, since employers want to keep employees.

Political events always influenced exchange rates. Donald Trump became the US President in January 2017. He is an active Twitter user and his messages periodically shake up currency and stock markets. The US introduced sanctions against Russian companies on April 6, 2018, and the RUB exchange rate fell sharply. We can see the reaction of traders in the 30-minute USD/RUB futures (SiM9) chart. 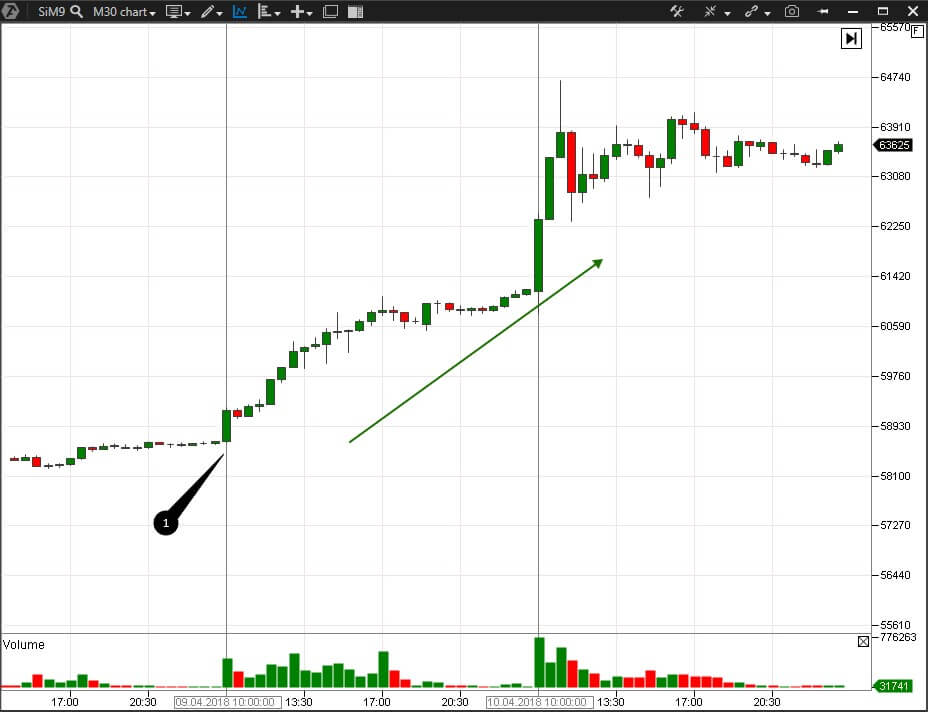 Donald Trump wrote about imposition of tariffs on Mexican goods in his Twitter on May 31, 2019. 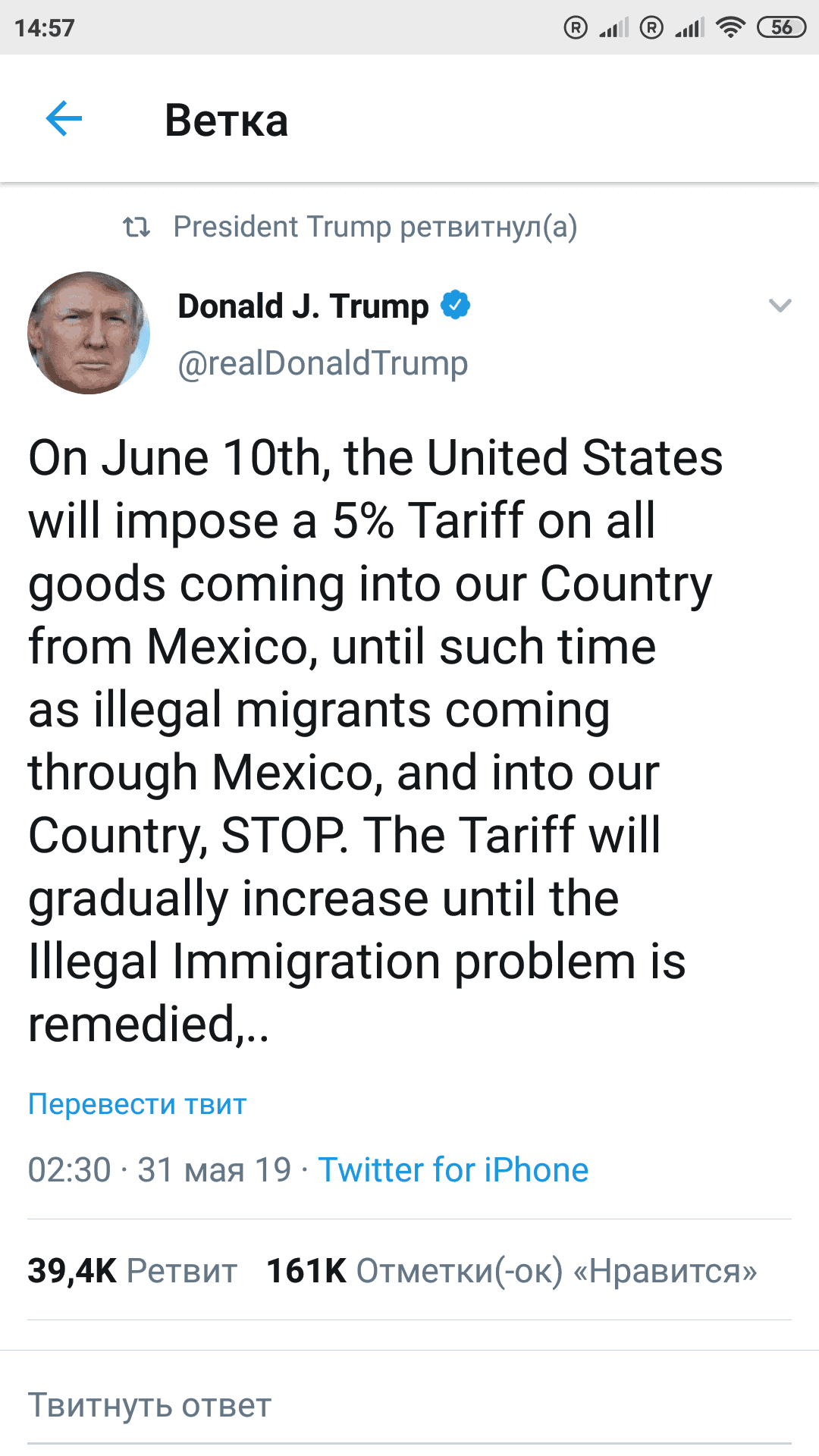 Reaction of traders that trade Mexican Peso (MXN) was immediate. USD/MXN rate grew up to the 3-month high. 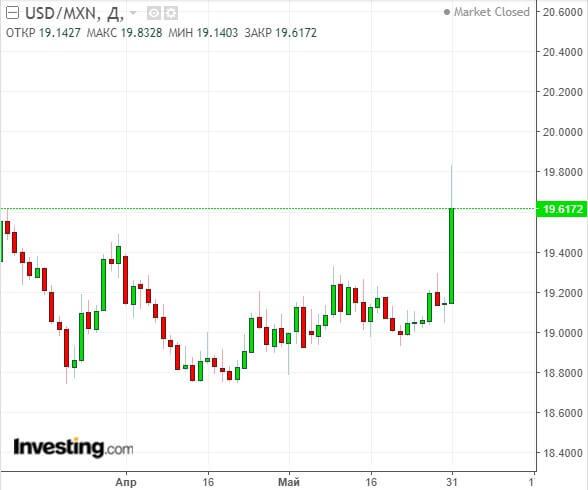 How to trade on fundamental news.

Trading on news is a risky undertaking. Nevertheless, if you want to try this trading approach, here are some important recommendations:

Footprint is displayed in the real-time mode. It helps a trader to understand who does what at each price level. Let’s assess advantages of a footprint in the 5-minute GBP futures (6BM9) chart after broadcast of bad news about PMI in April. 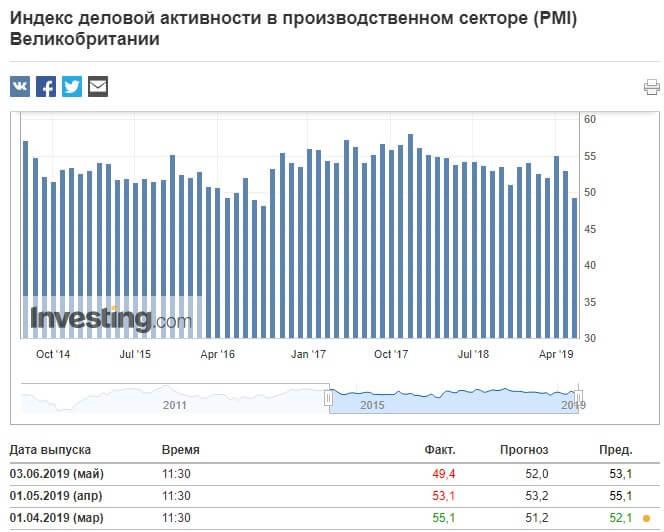 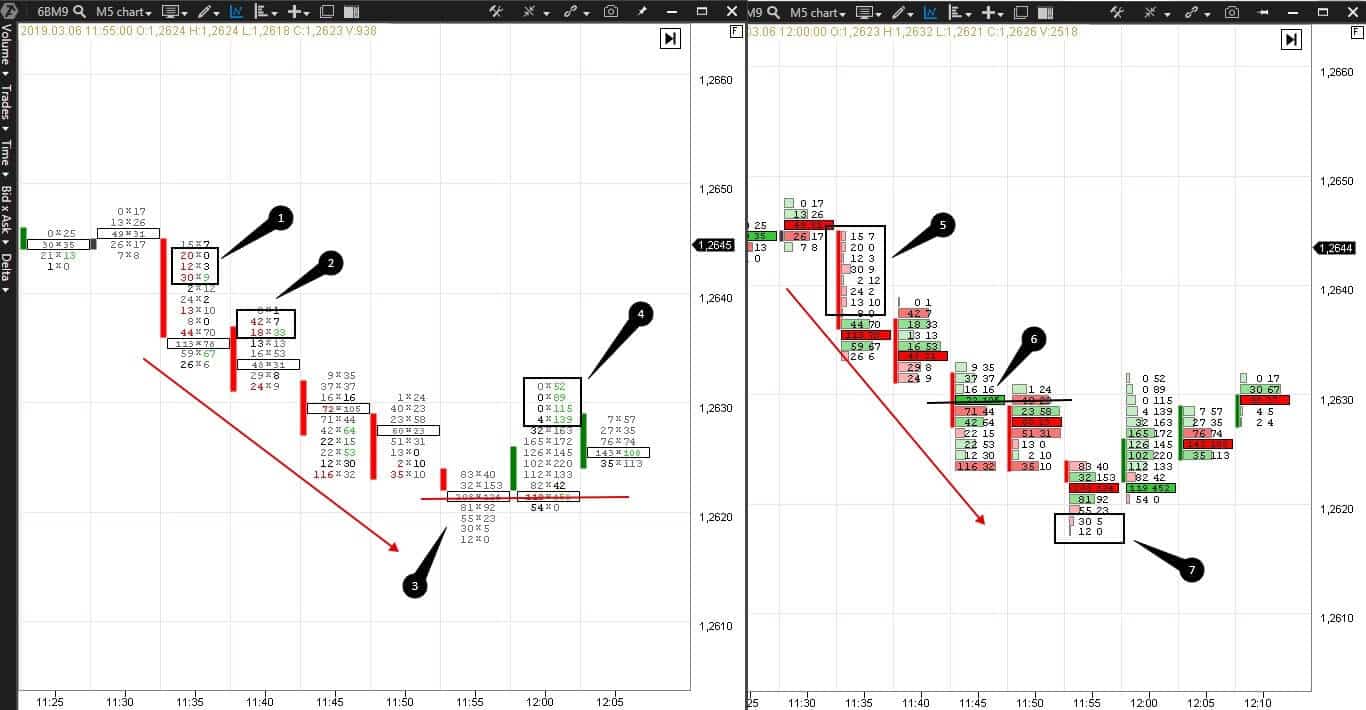 We marked multiple imbalances of sellers, which warn traders about further price decrease, with numbers 1 and 2 in the left chart. A short position could be opened here. Maximum volume levels of each 5-minute bar move down – we marked this movement with a red arrow. The price drop stops at the day’s low. Seller imbalances vanish and POC of two neighbouring bars form the support level, marked with a red line. Buyer imbalance emerges under number 4. However, this imbalance raises doubts, since:

It is worth waiting for additional confirmation of the price reversal in order to open a long position.

We marked a sharp price fall with number 5 in the right chart – a thin long bar. Such sharp movements, as a rule, do not stop at once, the inertia would continue to push the price further down for some time. Buyers tried to turn the price in point 6, but failed, since the next bar was opened below this level. While POC levels continued to go down. Sells exhaust in point 7.

Footprint shows whether you go with the market or stand on the way of the smart money. It increases confidence in execution of the trading strategy.

Advantages and disadvantages of the fundamental analysis of the currency market.

We complete practically all our articles with the thought that a competitive advantage leads to a profitable trading. A thorough knowledge of the fundamental analysis of a selected currency pair could become your advantage. Or a combination of the cluster and fundamental analysis could become your advantage. Try ATAS free of charge and find out which advantage saves your nerve cells and increases confidence.

What a trading strategy is. How to develop your own strategy. Examples.