You are here: Home1 / Preparations Before Trading2 / For Beginner Traders3 / Averaging in trading. Everything you need to know before you average your...

Averaging in trading. Everything you need to know before you average your position.

Averaging is a popular approach in trading. Some traders speak ill about averaging, while the others use it in all their trading systems. In this article, we will try to analyse this approach without prejudice and find the ‘golden mean’.

What averaging in trading is

Averaging is the process of opening additional positions with a standard or increased volume after execution of the first trade.

Further on in this article we will concentrate on averaging loss-making positions, since this way is applied by traders more often.

Let’s consider an example from the euro futures market. 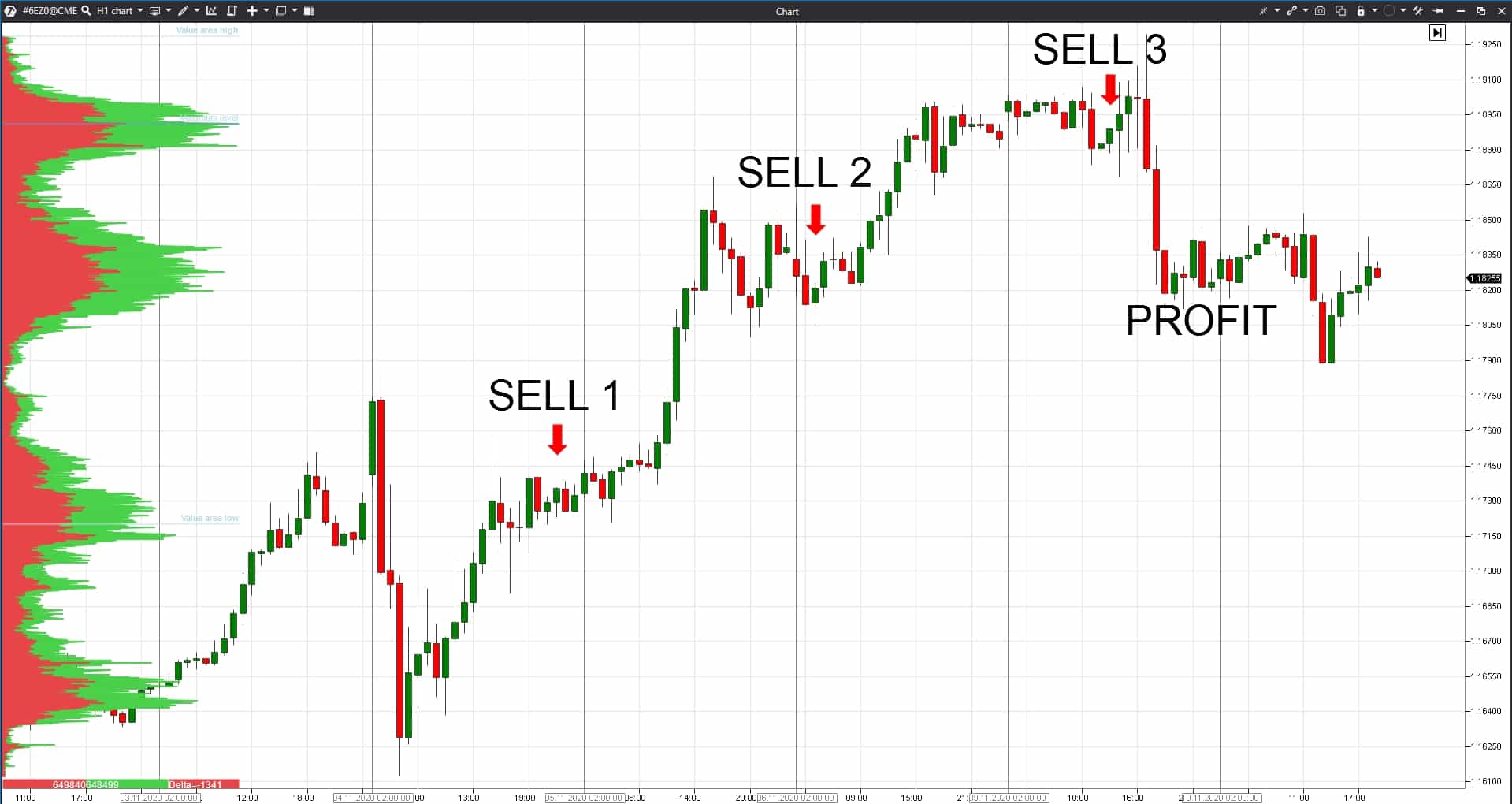 Let’s assume the following – a trader decided that the bearish dynamics will develop after a sharp reduction on November 4. And he executes the first sell trade (SELL 1) after the upward retracement.

However, the market moves against his trade and the trader can only wait. When it seems to him that a new down movement starts, he increases the volume twice and executes the second sell trade (SELL 2).

But the market moves against the trader again. Next day, the trader follows the same logic and executes the third sell trade (SELL 3), again increasing the volume twice.

After the third trade, fortunately for the trader, the price passes a sufficient distance down for the series of trades to be closed with a profit (PROFIT).

This is an example of averaging with increasing the volume of trades.

Averaging and a market maker

Do the professional market participants use the position averaging technique? Most probably they do.

Let’s consider the operation of financial companies, which execute agreements with exchanges and maintain liquidity when trading a financial instrument. In other words, they perform the work of a market maker.

It is commonly believed that market makers, as professional market participants, use mainly limit orders and fill the order book with them. All these things are done in the automatic mode with the help of robots.

Let’s consider an example of a trend movement in the daily S&P 500 stock index futures chart. We will use the Delta indicator in our analysis. 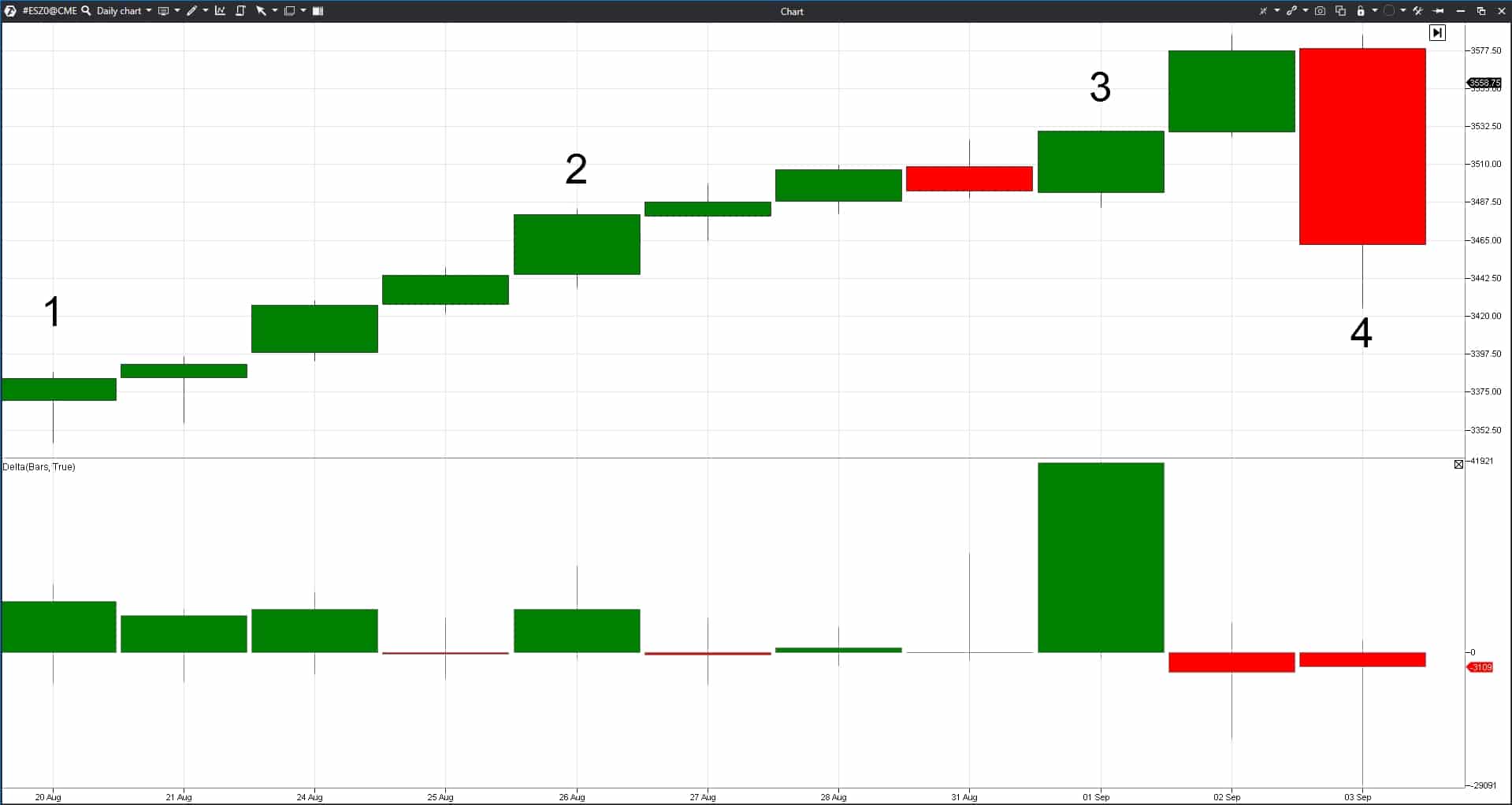 An uptrend on the positive delta is present in the market during several days (days, which are marked 1, 2 and 3). Since the delta is positive, it means that the majority of market participants executed market buys. Then, most probably, there was a market maker on the opposite side of their trades, who accumulated his selling position during the whole course of this movement, in fact, averaging his whole general position.

When a fall in prices, marked with number 4, took place in the market, the market maker got a chance to close his positions with a profit.

Most probably, major market participants use averaging but they use it professionally.

When averaging is bad

Averaging is ALWAYS bad for a beginner trader!

Averaging may create a delusion that bad trades could always be ‘pulled out’ with the help of averaging. It will work for some time but the payback is inevitable. In case there is a strong movement against you, you lose your complete deposit.

Example of the capital curve of a trading system with averaging:

No averaging will ‘pull out’ a bad trading system in the black!

When averaging could be expedient

You can think about averaging when:

Only then you can start studying practical application of averaging in trading and work over development of a new trading system with averaging elements.

In addition, it is important to remember that:

Such an approach will protect your funds. And if a trading system with averaging doesn’t work, you will be able to see it as early as at the demo account stage.

It is important to understand that:

The US authorities are ready to print USD 1 trillion. Bitcoin and Euro break...
Scroll to top -->
XThis site uses cookies. By continuing to browse the site, you are agreeing to our use of cookies.Cookie Settings Read MoreReject AllAccept
Manage consent