Support and resistance levels. How to differentiate between a false and true one?

Support and resistance levels are one of the main methods for the search of an entry point in the market. Various instruments and methods are used for building levels. A majority of traders, who do not use volume analysis, know some of them:

Most probably, traders use a big number of other methods for building levels. The main issue is how to identify efficient levels among this variety. Which of the identified levels are really important for the market and which are not?

You need a reliable check-out instrument.

Cluster chart is your assistant in level analysis

One instrument, which can help you in working with various levels, is the cluster chart from the trading and analytical ATAS platform. The cluster chart allows seeing and analysing not only the price but also volumes and direction of executed trades inside every candle.

Accumulation of big volumes gives a possibility to see prices and levels, which are important for the current market. You can conduct more in-depth studies, using the cluster chart not only for analysing a trade volume but also a trade number, Delta, BID and ASK trades and time.

The cluster chart will help you to increase efficiency of trading by levels. Let’s consider several examples in detail to see it.

There are two methods, with the help of which you can trade:

First, we will consider a level breakout.

The chart above shows the Euro futures from CME. The graphical level of 1,19200 is broken in point 1 on the M5 time-frame. How to understand is this a false or true breakout? Does it make sense to enter a trade or is it better to wait?

To find the answer, let’s consider this breakout with the help of the cluster chart: 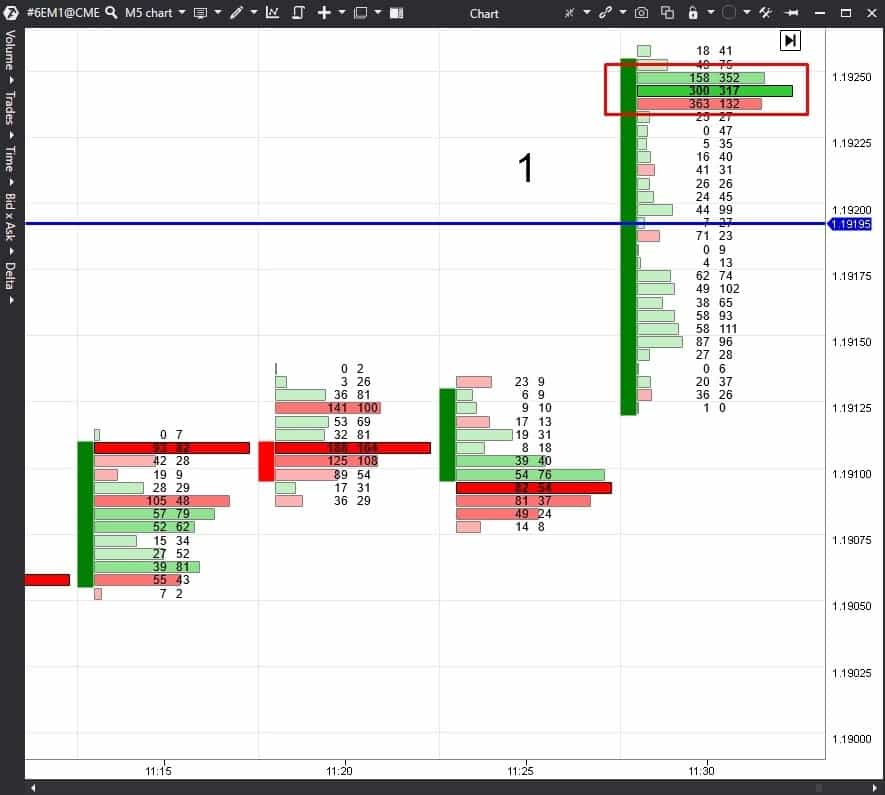 Having compared the maximum cluster values of the previous candles and breakout candle, we see that the breakout took place on the increased volume.

The maximum trade volume took place above the level. In the result of this fight between sellers and buyers, the price was pushed up since the candle closed near its highs. There were more buyers than sellers in the maximum cluster (judging by the green Delta).

A conclusion could be drawn from these data that, most probably, it was a true breakout. Now, a trader can act in accordance with his trading system.

So, what you should pay attention to when analysing a level breakout with the help of the cluster chart:

Having analysed these issues, a trader may formulate a judgement whether this level breakout was true or false.

If the breakout is false, it is transformed into a bounce from a level.

A true bounce from a level

The screenshot below shows an M1 candlestick chart of the same futures: 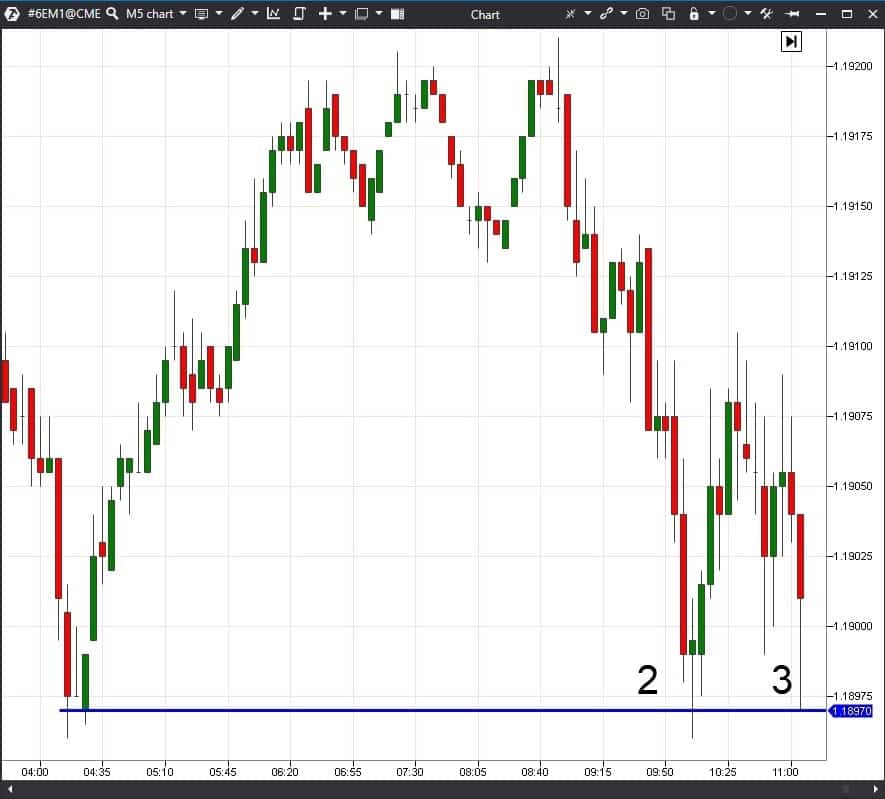 The price bounced from the level in points 2 and 3. How to understand what point is more preferable for opening a trade?

Let’s consider these points with the help of the cluster chart. 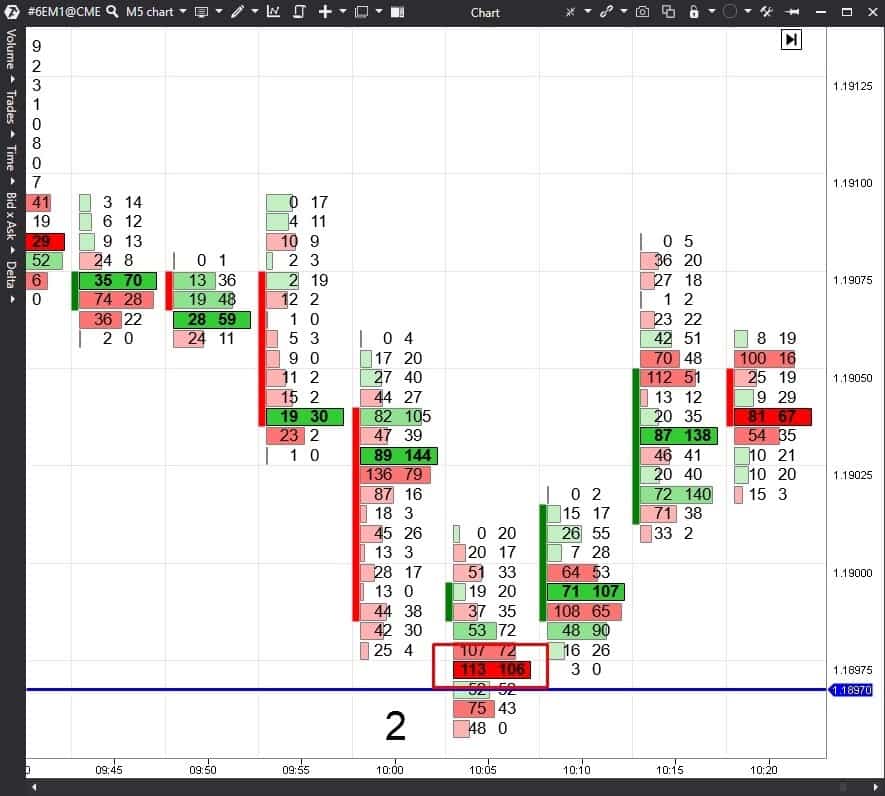 There is an increased volume in point 2. The traded volumes pushed the price up and the candle has the hammer shape, directed upwards.

Everything tells us that, most probably, there was a bounce. However, one thing can get your attention – the selling volume in the maximum cluster is higher than the buying volume (that is why the cluster is bright red). It is better to wait in such a situation.

And here is how the cluster chart looks like in point 3: 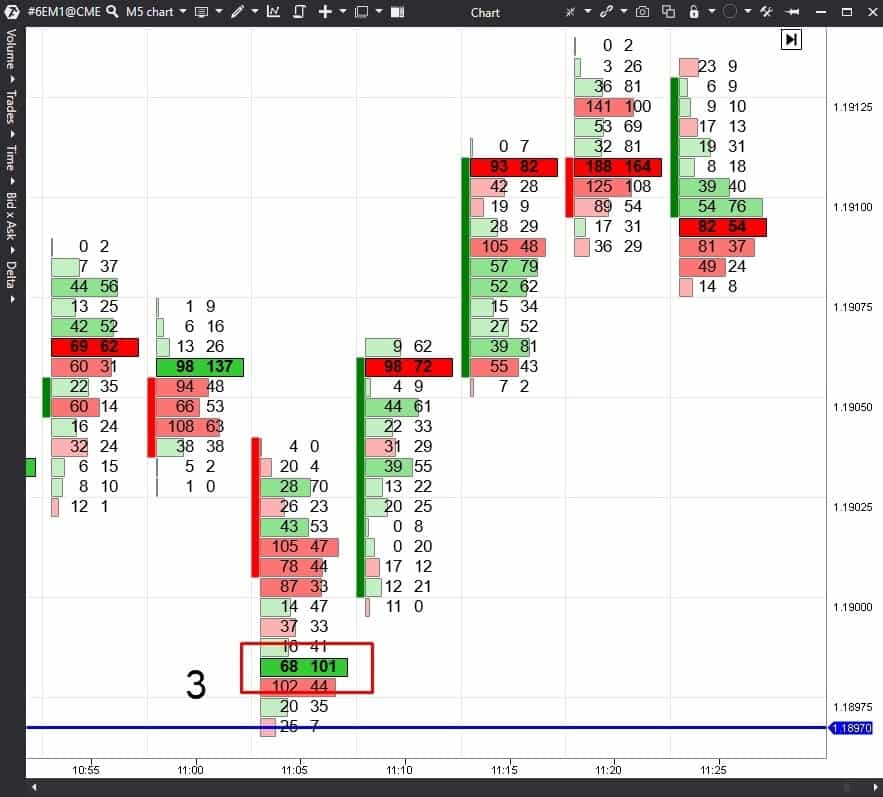 There were much more buyers than sellers in the maximum cluster in point 3.

That is why, there is a high probability that this point is a true bounce from the level and a reasonable point for entering into buys.

It is important to pay attention to the following data in the chart for identifying a true breakout:

Analysis of a situation in the cluster chart is like study of the market through a magnifying glass. Clusters provide advantage since they contain valuable information for making decisions.

You can use the cluster chart on any time-frame – both for intraday trading and middle-term one.

Conclusions. What to do in practice

Levels are an efficient instrument in trading and it goes without saying that it should be used. However, in doing so, it is important to check how the market reacts to one or another level.

In order to reduce a number of false entries into the market, you should use the cluster chart in order to analyse behaviour of buyers and sellers in-depth and understand who had a local win in this fight.

In order to identify a true breakout or bounce, you should pay attention to:

Download the test version of the ATAS platform free of charge. Use the cluster chart in your trading for increasing efficiency of your strategies.

How to trade by Delta indicator patterns. Chart examples with explanations